Elizabeth Ann Warren will be the 2020 Democrat’s Presidential nominee and she will be elected President in November. I have been writing about the Senator from Massachusetts since the inception of this Blog in late 2018. She is very electable and carries none of the baggage which the White House incumbent shamefully and dishonestly used against Hillary Clinton.  Senator Warren will take Trump to the cleaners.

While candidates have tangled publicly with Joe Biden, they are being more cautious with the Massachusetts Senator.

WASHINGTON— Elizabeth Warren is building a broad coalition of Democratic voters, and her rivals are taking notice. But so far, they are still testing out ways to undercut her appeal.

Ms. Warren’s steady rise has prompted primary opponents such as Bernie Sanders, Kamala Harris and Pete Buttigieg to search for ways to blunt her momentum at a time when the leading contender, Joe Biden, has weathered a series of stumbles and direct attacks. 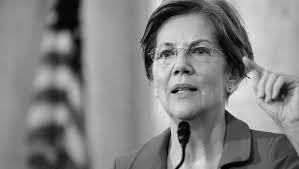 While candidates have tangled publicly with the former vice president over everything from his age to his agenda, they are being more cautious with Ms. Warren, often criticizing her indirectly or homing in on her policy proposals rather than her record.

“We got a lot of great people running, but some of these ideas are better left in the college faculty lounge than right here at this port,” Minnesota Sen. Amy Klobuchar said during a stop Thursday at a Detroit port.

She said later that she wasn’t singling out the former Harvard Law professor.

Ms. Harris, meanwhile, expressed her frustration about Ms. Warren’s fundraising practices during a private New York fundraiser on Tuesday, people familiar with the event said. Ms. Harris, who hasn’t been so critical of the Massachusetts senator in public, said it was hypocritical for Ms. Warren to claim she wasn’t taking money from large donors when her campaign was using millions transferred from her Senate account and raised before she swore off traditional fundraising.

Powered by large-scale rallies, Ms. Warren has attracted liberals and college-educated women as she seeks to challenge Mr. Biden in the primaries. But a recent Wall Street Journal/NBC News poll showed a boost in enthusiasm for Ms. Warren and detailed support for her among a range of age groups and backgrounds.

That is giving her opponents an incentive to confront her on health care and fundraising with an eye on cracking into her support in Iowa, where she has organized heavily ahead of next February’s leadoff caucuses.

Kristen Orthman, Ms. Warren’s communications director, said, “we will continue to run the campaign we have from the beginning: identifying what is broken, talking about our plans to fix it, and building a grass-roots movement to make it happen.”

The Warren campaign has noted that the senator raised and donated $11 million to help Democrats up and down the ballot around the country while she was running for re-election in 2018.

The large field of Democratic contenders is gathering in Des Moines this weekend for the Polk County Democrats’ steak fry fundraiser, an annual event expected to draw more than 10,000 activists.

Many Democratic campaigns have taken to heart the lessons of 2016, in which several Republican campaigns declined to challenge Donald Trump forcefully until he had built a significant advantage in the primary and then went on to win the party’s nomination and the presidency. Democrats have already tried to pick off Mr. Biden’s support.

Now, with Mr. Biden still leading as the fall campaigning picks up, candidates who hope to finish in the top tier in Iowa are looking for new sources of votes.

“In this setup, it is more dangerous to be the No. 2 or No. 3 candidate in the vote total than it is to be 4, 5 or even No. 1,” said Democratic strategist Dan Sena, a former top aide for the House Democrats’ campaign arm.

When Ms. Warren has faced scrutiny, it has largely centered on her support for Mr. Sanders’s Medicare for All plan.

Mr. Biden, during an event Friday in Cedar Rapids, repeated his argument that a single-payer system would be too costly and require higher taxes on middle-class families.

“Tell Elizabeth,” the former vice president told a woman who accused him of protecting the insurance industry and later said she is backing Ms. Warren, “it’s going to cost a lot of money and she’s going to raise people’s taxes doing it, and what are we going to do in the middle of a recession if we end up there?”

Mr. Buttigieg, the mayor of South Bend, Ind., said Ms. Warren is too vague about how she would pay for such a plan.

He said in a Thursday interview with CNN that Ms. Warren “was extremely evasive” when she was asked during the September Democratic debate if the proposal would require taxes to be increased on middle-class families.

“I think that if you are proud of your plan and it’s the right plan, you should defend it,” Mr. Buttigieg said.

Mr. Biden has largely steered clear of Ms. Warren as he sits atop the polls. But both Ms. Warren and Mr. Sanders are looming large over his race.

Neil Bluhm, a billionaire real estate and casino magnate, introduced the former vice president at a Chicago fundraiser on Thursday, telling the audience that Ms. Warren and Mr. Sanders “don’t represent the Democratic Party” that he supports and that Mr. Biden “has the best chance of defeating Trump.” 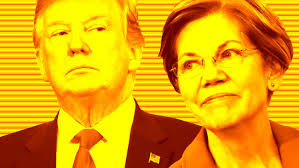 While Ms. Warren may be gaining momentum, Mr. Sanders is still largely focused on Mr. Biden, with whom he has more clearly defined policy and strategy differences.

Aides to Mr. Sanders have long said they believe that Mr. Biden and Mr. Sanders share a similar section of working-class voters and that one could benefit if the other stumbles.

When asked about Mr. Sanders’s approach to Ms. Warren, senior adviser Jeff Weaver said Mr. Sanders would highlight that he “is the only leading candidate who is running a 100% grass-roots campaign and committed to funding a grass-roots funded general election campaign.”

He also pointed out that Mr. Sanders said during the most recent Democratic debate that he was the only candidate to vote against all of the military budgets in the Trump administration.

Ms. Warren has voted for one of the three, but Mr. Sanders didn’t mention her.