Yet another stranger than fiction tragedy, the result of  Police killing a totally unsuspecting, innocent man in his own apartment.

DALLAS—The trial of a female white police officer who shot and killed her upstairs black neighbor after accidentally walking into his apartment began with prosecutors saying sexual banter between her and her work partner showed that fatigue wasn’t the problem when she failed to recognize it wasn’t her home.

Amber Guyger’s attorneys called it a tragic accident that she came home tired from a long day of work on Sept. 6 last year, walked into the apartment one floor above her own and mistook its occupant, Botham Jean, for a burglar.

What is undisputed is that Mr. Jean’s door was unlocked and that both were likely confused when she entered his apartment. Mr. Jean, who was watching TV in the dark, stood up and moved toward the door when Ms. Guyger fired two shots, prosecutors said.

He died on his floor as she frantically called 911, repeating to the operator more than a dozen times, “I thought it was my apartment.”

Prosecutors seeking a murder conviction, however, played down the stress and fatigue defense, saying Ms. Guyger —who was later fired from the Dallas police force—was a highly trained officer who had worked a normal day. They suggested she was making plans to meet up for a tryst with her work partner, Martin Rivera, before a conversation with him left her so rattled that she began making bad decisions.

Whether this constitutes murder or a noncriminal accident is expected to center on Ms. Guyger’s mistakes and if they were reasonable. 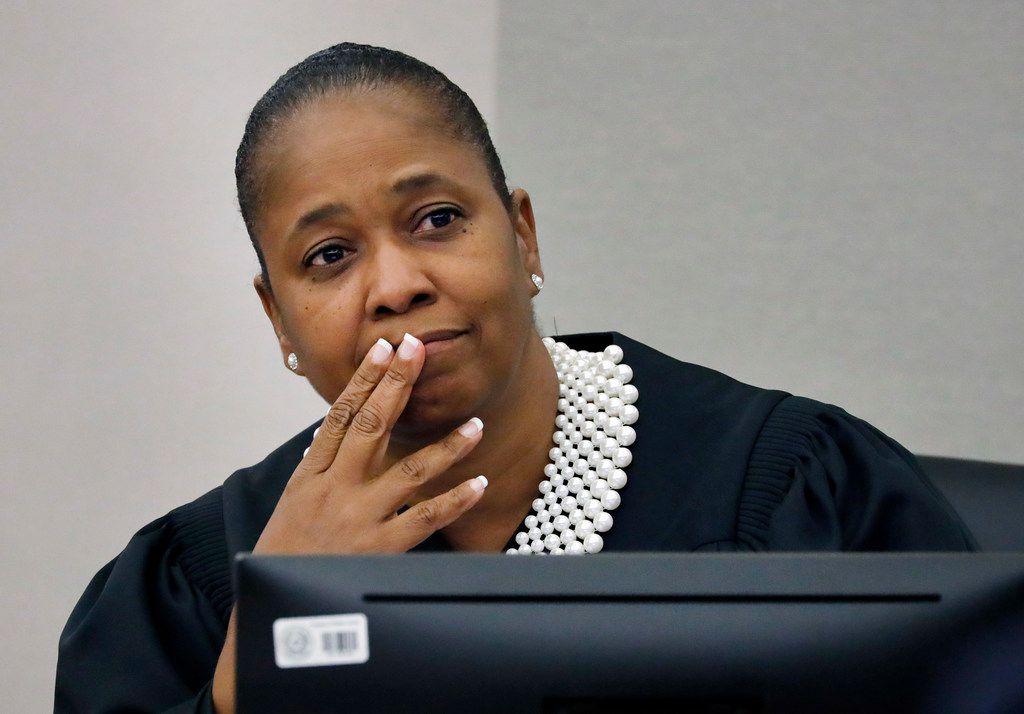 Trial Judge Tammy Kemp worked at the Dallas County district attorney’s office twice. Both times she prosecuted family violence cases. The first time was from 1995 to 2000. She left after her mother was diagnosed with terminal cancer and was expected to live only six months. Her mother lived another four and a half years. For a brief time, Kemp did defense work. She returned to the district attorney’s office in 2006 and stayed until she became a judge in 2015.

The shooting has captivated a city with a history of both racial tension—Mr. Jean was black and Ms. Guyger is white—and, in recent years, deadly attacks on police. It has raised questions about reasonable human fear as much as it has inspired horror at the idea of an officer walking in, unprovoked, to kill someone in his own home.

In the wake of the killing, civil rights activists and Dallas’s African-American community protested what they argued was an unjust shooting, while police officers largely rallied to Ms. Guyger’s side.

Family members of both Mr. Jean, who was 26 years old, and Ms. Guyger, 31, were in court Monday, along with reporters and community supporters jostling for entry to the small courtroom. The trial may last as long as two weeks, during which time the jury will be sequestered.

Ms. Guyger was coming off a 13-and-a-half-hour shift, at the end of which she had begun exchanging sexual messages and photos with Mr. Rivera as they discussed meeting up later that night, according to copies of the messages shown to the court.

Prosecutors claimed those and other messages showed she wasn’t particularly tired. Mr. Rivera, however, denied in testimony that he intended to meet Ms. Guyger that night. He said the texts were merely flirting and their sexual relationship had ended months earlier.

Phone records presented in court show that Ms. Guyger called Mr. Rivera while she was driving home and they spoke on the phone for more than 15 minutes. Prosecutors suggested that whatever happened during that phone call altered Ms. Guyger’s mental state, making her fail to notice that she’d parked a floor higher than normal or that Mr. Jean’s apartment had a red door mat and smelled of marijuana.

Defense attorneys contended that it was perfectly understandable, though tragic, that Ms. Guyger absorbed none of those things after a long week that left her so tired she had asked to take the next day off work.

“Everything was behind her and she went on autopilot,” defense attorney Robert Rogers told jurors. “Many of you have done the same thing.”

Mr. Rogers contended that Ms. Guyger was terrified as a large man in what she believed to be her home moved toward her. They said she reacted with reasonable self-defense.

Assistant District Attorney Jason Hermus said the downward trajectory of a bullet fired from a short woman into a tall man meant Mr. Jean had likely been shot just as he was getting up from the couch, before stumbling several steps toward the door. Mr. Rogers called it “preposterous” that Mr. Jean could have moved across the apartment after being shot and said he had likely leaned forward as he was walking toward Ms. Guyger.