The election may be nearly a  year away but already the political seers are jumping into the Electoral College prediction swamp.

Given the ongoing Impeachment hearings, the peculiar trip the President made to Walter Reed Hospital last weekend and given Trump’s  volatile personality, anything is possible.

Could Trump be re-elected if the election were today?
Carter Moore, Degree in Political Science, former Congressional aide and Federal employee

The last time I weighed in on Trump’s fortunes more-than one year out from the election, my prediction didn’t age well. So I’ll be more tempered this time and just say: An election today would be an up-hill battle for Trump.

Most polls we see of President Trump’s approval draw on national samples, making it difficult to draw state-by-state conclusions (which is what matters). However, there are two agencies which provide regular, state-by-state data for public consumption: Morning Consult[1] and Civiqs[2].

Here is what their end-of-September data (as at Sept-30 and Oct-1, specifically and respectively) shows:

Obviously, there are both alignments and disagreements in the data which open up a myriad of plausible outcomes. However, let’s try and capture the breadth of possibilities by trying to identify the current, best- and worst-case scenarios.

For the best-case, I’ve used the highest approval rating in each state, and then added 2%, which is roughly the difference in between the national averages of Trump’s overall approval rating[3] and his head-to-head match-ups against leading Democrats[4] .

In the below map, unshaded states are toss-ups (where Trump’s boosted approval is 48–52%), while lightly shaded leaning states are below 55% (with respective partisanship), darker colored states 55–59%, and deep colored states 60% or more. 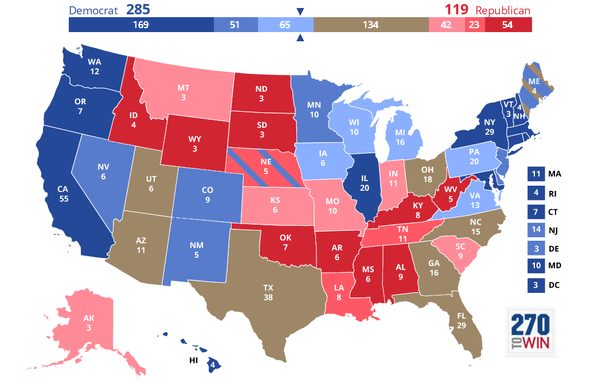 Again, that was giving the President the highest of every state-by-state approval rating +2%. That’s a massive battlefield for a best-case scenario.

While this map should absolutely serve as a gut-check to any Democrats or Never-Trumpers who think 2020 ought to be a cakewalk against the President (if Pennsylvania were to swap columns, it’d be game over; if only Michigan went, that’d set up a possible tie), it is also not the map of an incumbent who has managed to expand his base[5] .

Swinging to the other side of the spectrum, I simply used the lowest approval rating measure in each state as the proportion of Trump’s vote and gave the balance over to the Democrats. Here’s that map: 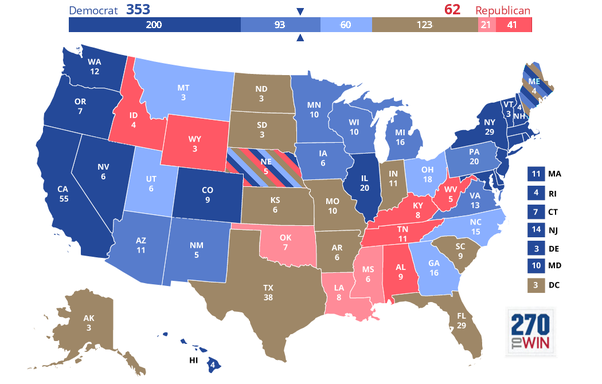 I would only consider this map plausible if the bottom falls out of the economy[6] [7] ; and while approval ratings don’t at all translate 1:1 to “would vote for,” much less with any reliability more than one-year out[8] , the fact that this map exists at all based on current approval ratings should be terrifying for an incumbent president.

So while I won’t be hanging my hat on any predictions until we’re actually in the general election part of the race (mostly[9] ), I think this data at least affirms the position that President Trump is much more vulnerable than many might currently believe.

[5] Carter Moore’s answer to What has Donald Trump done to expand his base of voters for his 2020 re-election bid?

[6] Carter Moore’s answer to Why do some people say that President Trump’s approval rating should be higher because of the economy? What “should” it be?

[7] Carter Moore’s answer to How would a recession in 2020 impact President Trump’s chances of reelection?

[8] Should We Take These Early General Election Polls Seriously? $#!% No!

[9] Carter Moore’s answer to Are there any US states where you can 100% guarantee me right now that they’ll back Trump in the 2020 election?