This targeted attack by the American military is sure to increase tension in the Neighborhood.  With an erratic incumbent in power in America this could all spiral out of control.  Quickly.

The White House said Donald Trump ordered an air strike that killed powerful Iranian general Qassem Suleimani in Baghdad in the early hours of Friday, in a dramatic escalation of an already bloody struggle between Washington and Tehran for influence across the region.

Many consider Suleimani to have been the second most powerful person in Iran, behind the Supreme Leader, Ayatollah Ali Khamanei, and arguably ahead of President Hassan Rouhani. Through a mix of security operations and diplomatic coercion, has been more responsible than anyone else for projecting Iran’s influence in the region.

Suleimani, who ran Iranian military operations in Iraq and Syria, was targeted while being driven from Baghdad airport by local allies from the Popular Mobilisation Units (PMU). The deputy head of the PMU, Abu Mahdi al-Muhandes, a close Suleimani associate, was also killed in the attack.

“General Suleimani was actively developing plans to attack American diplomats and service members in Iraq and throughout the region,” a Pentagon statement said. “This strike was aimed at deterring future Iranian attack plans. The United States will continue to take all necessary action to protect our people and our interests wherever they are around the world.”

Minutes before the statement Trump tweeted a US flag without comment. Later, the White House put out a statement saying the strike was a “decisive defensive action” carried out “at the direction of the president”. 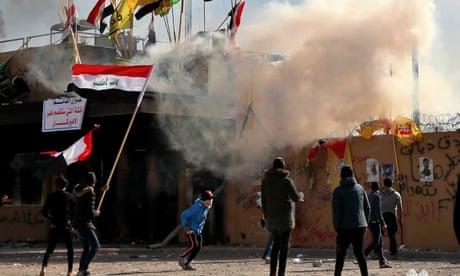 Suleimani was commander of the Quds Force, the elite, external wing of the Iran’s Islamic Revolutionary Guard Corps (IRGC), which the Trump administration designated as a terror organisation in April last year. The Pentagon statement claiming responsible for the strike accused the Quds Force of being responsible for the deaths of hundreds of US service members and the wounding of thousands more.

The escalation had followed a tit-for-tat series of strikes by both sides, which have been protagonists in Iraq since late 2006. Suleimani had been central to almost all that Iran did and was considered by senior officials under Barack Obama as being close to untouchable.

The strike came at a time when Iraq was already on the brink of an all-out proxy war, and hours after a two-day siege of the US embassy in Baghdad by a mob of PMF militants and their supporters. The Pentagon accused Suleimani of having masterminded the mob attack.

That siege followed US air strikes on camps run by a PMF-affiliated militia particularly closely aligned with Tehran, which in turn was a reprisal for that militia’s killing of a US contractor in an attack on an Iraqi army base on Friday.

The US has deployed 750 airborne troops to Kuwait as a rapid reaction force available for use in Iraq, and officials has said up to 3,000 could be sent in the coming days. The defence secretary, Mark Esper, said on Thursday that more militia attacks were expected and the US reserved the right to take preemptive action to stop them.

“There are some indications out there that they may be planning additional attacks,” Esper said. “If we get word of attacks, we will take pre-emptive action as well to protect American forces, protect American lives. The game has changed.”