The Golden State Warriors coach is one of the most articulate and well spoken people in the world of Sports. The San Francisco area is truly blessed to have such a smart guy as one of its sports leaders.  Steve Kerr’s politial observations are the result of personal experience and personal tragedy.  His father, a respected Educator, was murdered in Beirut when Steve was a student athlete at the University of Arizona.

Warriors head coach Steve Kerr voiced concern Saturday evening that the United States is on the verge of an “unwinnable” and “unnecessary” war with Iran.

“I try to use my Twitter platform to remind people to do their homework before we all just blindly wave the flag and get ourselves into another mess like we did in Iraq. I remember when we entered the Iraq War, I think I was in my last year playing. … I remember the patriotic fever that kind of swept up the nation.

“Since that time, we’ve done a great job in our league and other leagues of supporting our veterans — bringing them to games and giving them ovations, which I wholeheartedly support. But what I think would be even more supportive is to not get involved and send soldiers overseas to unwinnable or unnecessary wars in the first place. That’s how we can best support our men and women who are representing us.”

Kerr’s comments came before the Warriors’ game Saturday against the Detroit Pistons at Chase Center. 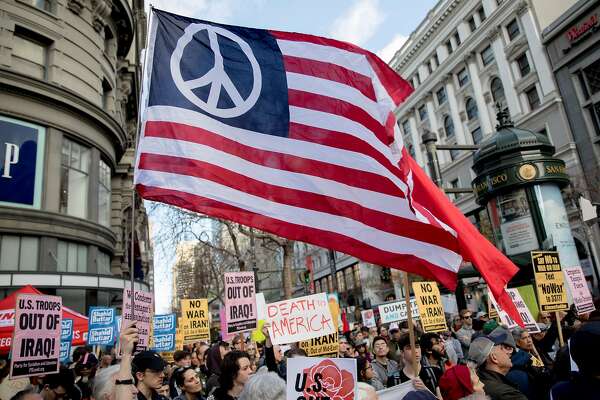 Thousands march in SF to denounce US attack, potential war…

No topics touch Kerr more personally than gun violence and U.S. relations with the Middle East. In 1984, Steve’s father, Malcolm Kerr, was assassinated by two gunmen outside his office in Beirut.

In recent years, Steve Kerr has voiced his displeasure with President Trump’s handling of the Middle East multiple times. Shortly after the president enacted a travel ban in January 2017 for citizens of seven Muslim-majority countries, Kerr told reporters, “We’re really going against the principles of what our country’s about.”

Now, Kerr fears that the U.S. is repeating past mistakes and fueling a conflict that could cost many Americans their lives.

“We have a history in this country, all you have do is read about Vietnam and Iraq,” Kerr said. “People are misled by our government. It happened in Vietnam. We know that. The facts are not facts, and we have to be very careful right now with what we’re being told.

“If we’re led into another war, the implications for so many families, so many people are so drastic that we all need to understand what’s happening and support our troops by making sure we press our government to do the right thing. I’m saying everything I am to support our young men and women around the world who are putting their bodies on the line.”