The Neo Nazis are rising in Germany.  Fortunately the public is motivated to take to the streets and call out the danger.

Sadly, politics in America do not reach this fever pitch of activism in the face of an increasingly demagogic and dictatorial leadership in Washington.

It could well be that America is taking the slow road to Fascist leadership.

The citizenry is allowing the scourge of  fascism to prevail, through willful ignorance.

Thuringia’s controversial election pact and Dresden’s day of remembrance have stirred memories of Germany’s Nazi past. Thousands of protesters took to the streets of Dresden and Erfurt for marches against the far right.

Thousands of people took to the streets of the German cities of of Dresden and Erfurt on Saturday to demonstrate against political deals with the far-right Alternative for Germany (AfD) party.

The Erfurt protest was the latest response to a controversial vote that saw politician Thomas Kemmerich elected as premier of the state of Thuringia after the business-friendly FDP and center-right Christian Democrats (CDU) made a secret pact with the far-right AfD.

The decision broke a political taboo in Germany, caused nationwide outrage, and prompted the resignation of German Chancellor Angela Merkel’s likely successor Annegret Kramp-Karrenbauer as head of the ruling CDU.

During Saturday’s rally, many protesters in Erfurt, the capital of Thuringia, held up placards which read: “No pact with fascists” or “No place for Nazis” as they gathered at Erfurt cathedral square. 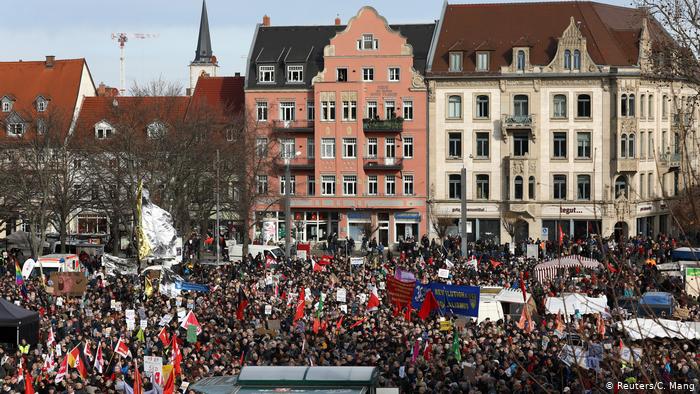 Organizers said at least 50 busloads of people from all over Germany had descended on Erfurt. An estimated 18,000 people participated in the protests, according to organizers.

“By making a pact with the AfD, the CDU and FDP opened the door of power to the extreme right,” said a spokeswoman for the “Unteilbar” (Indivisible) movement, made up of union and charity workers, artists and politicians. Thanks to the unrelenting protests, “we, as civil society, have managed to slam this door shut again.”

Michael Rudolph, chair of the DGB Hesse-Thuringia branch told German public broadcaster MDR that Saturday’s demonstration would not be the end of the protest against the vote.

The scandal in Thuringia unfolded when Kemmerich, an FDP politician was elected on February 5 thanks to the AfD’s backing. He won by one vote against the popular Left politician Bodo Ramelow.

In the face of massive pressure from Berlin, Kemmerich resigned after just three days in office.

Anti-fascist counter-demonstrators, meanwhile, forced a route change on a far-right march in Dresden on Saturday.

“On a day like this, you can’t just stand idly by. We are here to say that this is not our Dresden,” Jan, a 27-year-old counter-protester, told DW, with his face partially covered. “There is no room for Nazis in this city — not now, not ever.”

DW correspondent Dana Regev reported that around several hundred neo-Nazis had begun their “funeral march” from the city’s central station.