Despite objections from one Republican (see earlier Blog Post) the US House of Representatives passed the Two Trillion Dollar stimulus package a short time ago.

The House of Representatives on Friday approved the historic $2 trillion stimulus package that passed the Senate earlier this week, overcoming last-minute drama by using an unusual procedural move to thwart a demand by a conservative Republican to force members to vote in person.

The Republican, Rep. Thomas Massie of Kentucky, infuriated members in both parties by bringing them back to Washington amid uncertainty over whether he would request a full roll call vote. That uncertainty forced many to travel during the public health emergency simply to deny his demand in order to ensure swift passage of the measure on Friday.
Republican Rep. Thomas Massie of Kentucky announced Friday that he would request a full roll-call vote, though sources have told CNN there may be procedural steps to deny Massie’s request from requiring a recorded vote.
“I swore an oath to uphold the constitution, and I take that oath seriously,” Massie tweeted just before noon ET, on Friday.
The bill now goes to President Donald Trump’s for his signature as the American public and the US economy fight the devastating spread of Covid-19.
The far-reaching legislation stands as the largest emergency aid package in US history. It represents a massive financial injection into a struggling economy with provisions aimed at helping American workers, small businesses and industries grappling with the economic disruption. 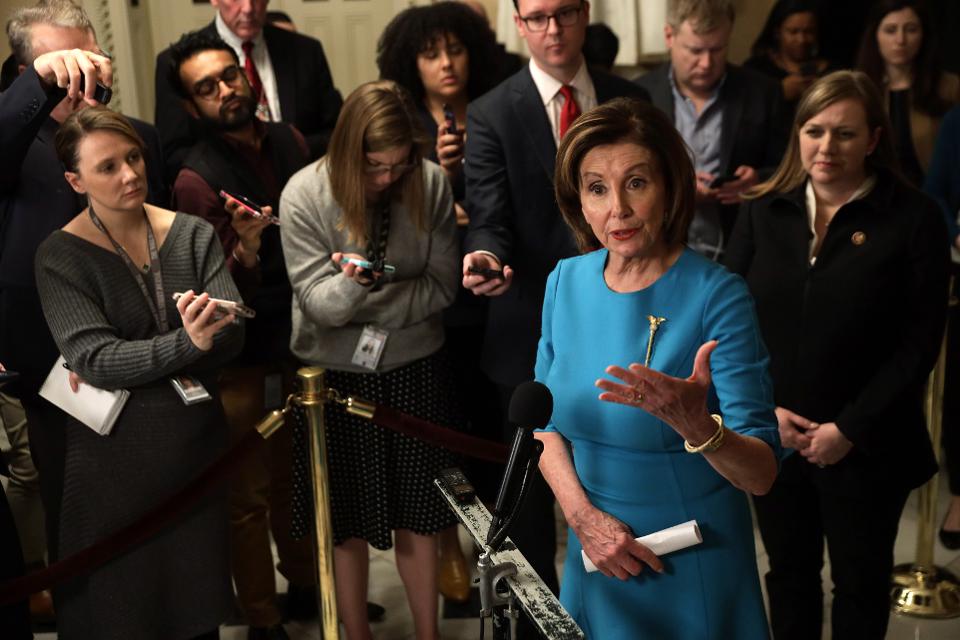 House Speaker – San Francisco Congresswoman Nancy Pelosi meets with the media
Key elements of the package include sending checks directly to individuals and families, a major expansion of unemployment benefits, money for hard-hit hospitals and health care providers, financial assistance for small businesses and $500 billion in loans for distressed companies.
House leaders face pressure to pass the legislation as quickly as possible and minimize the risks to their members in the process — and the bill had been expected to be taken up by voice vote, a move that would allow for quick passage and was designed to permit most House members not to return to Washington for a full roll call vote.
Steny Hoyer’s office advised members Thursday evening they were encouraged to be in Washington on Friday at 10 a.m. ET because the bill may not pass that way after all. “There is now a possibility,” the notice from the Maryland Democrat’s office said, that a Republican may force a recorded vote.
https://www.cnn.com/2020/03/27/politics/coronavirus-stimulus-house-vote/index.html