One of the positive side effects of the Shelter in Place is the drastic reduction in vehicular emissions. Auto traffic, by one estimate, is down 70 percent.  A recent survey said that San Francisco air quality is amongst the best on the planet.

When the Shelter in Place ends hopefully gas guzzling, air polluting cars will no longer rule the planet.  That’s a dream but it’s always good to dream of a better world.

San Francisco’s Great Highway was devoid of cars Wednesday as workers once again cleared sand from the roadway.

And one city supervisor wants to keep it that way until the coronavirus crisis is over, opening up space for bicyclists and pedestrians in the Outer Sunset.

“!! Yes,” the Bicycle Coalition exclaimed three times on Twitter when the supervisor floated the idea.

“If it also makes sense to our public health officials, I’d love to see Upper Great Highway stay closed to cars for the duration of shelter-in-place,” Mar said.

Mar argued that keeping the road car free would help improve the mental and physical health of people who need exercise while sheltering in place.

Upper Great Highway from Lincoln to Sloat is temporarily closed to vehicles again due to sand in the roadway, creating ideal space for folks to exercise with social distancing. I’ve requested SFMTA to keep it closed throughout the shelter-in-place order. 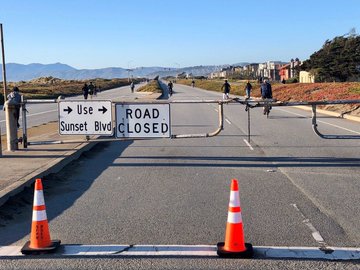 Whether the stretch between Sloat Boulevard and Lincoln Way remains closed during the order is up to transit officials, Mar said.

He asked Jeffrey Tumlin, the head of the San Francisco Municipal Transportation Agency, to make the temporary change last Friday.

“He updated me this morning that he’s currently in discussion about my request with other city departments about my request,” Mar said. “I think it’s important that my request be properly vetted by our health and emergency operations officials.”

Public Works also has a say over when to clear sand from the eroding beach off the roadway, Mar said.