Personal Protective Equipment (PPE) is no platform for political propaganda.

Everything is political in San Francisco even face masks during the Pandemic.

The cops face scarves have raised the ire of the American Civil Liberties Union.

The ACLU calls these scarves a “politcal button” and is calling out the cops for wearing scarves emblazoned with the Stars and Stripes along with a thin blue line.

Send the Chief your suggestions.

San Francisco Police Chief Bill Scott is seeking “neutral” face coverings for the city’s rank and file, an effort to defuse tensions after officers patrolled a May Day protest in controversial masks emblazoned with the “thin blue line” flag.

In a statement, Scott acknowledged the divisive nature of the flag, which bears the same stars and stripes as the American flag, except that it’s midnight blue with a blue stripe across the middle. The symbol gained prominence in the Blue Lives Matter movement, a display of unity and pride among police officers in reaction to Black Lives Matter.

Officers wore identical flag-themed masks to oversee a demonstration in the Castro district Friday, during which two homeless women locked themselves inside a vacant house. The women sought to highlight San Francisco’s affordability crisis and increase pressure on Mayor London Breed to put all homeless people in hotels amid the deadly coronavirus pandemic.

But to some people, the police officers, with their matching face garments, became stars of the show. 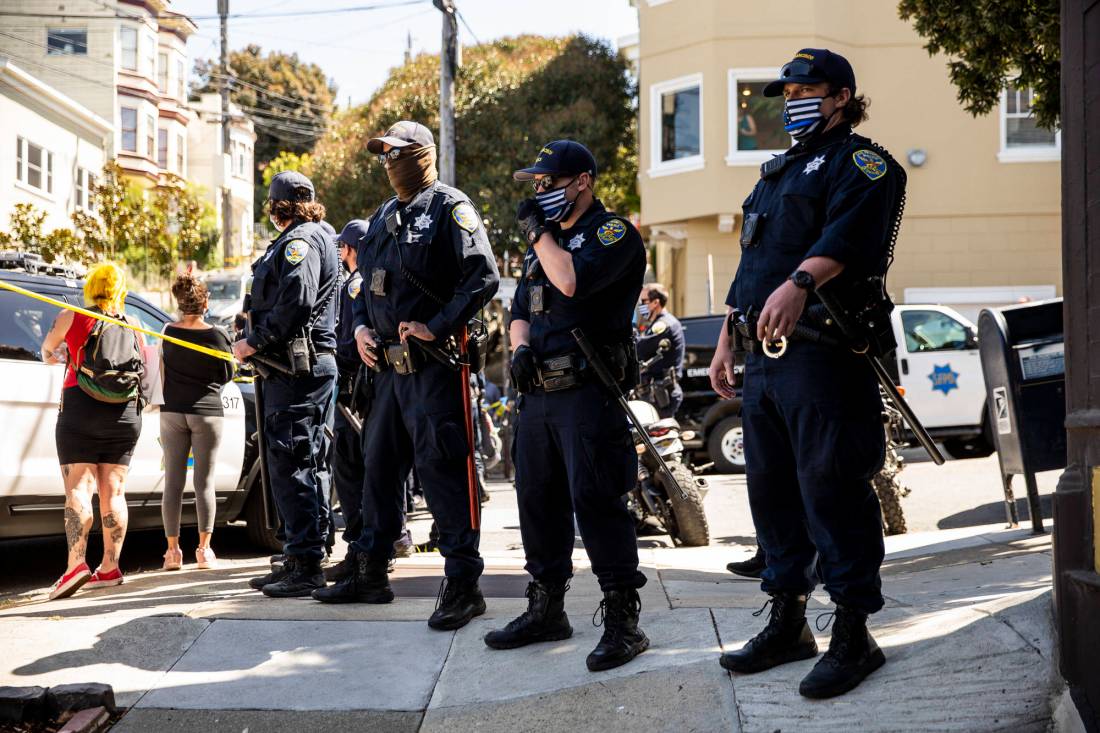 Retired American Civil Liberties Union lawyer John Crew was irate when he saw the masks, partly because of the flag, but largely because each one had a San Francisco Police Officers Association logo.

“The thin blue line is a political symbol,” he noted, referring to the flag and stripe. “And it’s a POA-branded mask. It’s like wearing a political button.”

He viewed the insignia as a direct challenge to a long-standing policy that bars police from expressing political opinions while wearing their uniforms. The police union has sparred with Scott throughout his three-year tenure, though according to Crew, the power struggle between the department and the association existed long before the chief arrived.

“It makes you wonder if it was some sort of stunt and if they were trying to provoke a controversy,” he said.

Even without the police union branding, the blue flag and stripe are potent images that invite various interpretations. Scott described them as a sincere expression “to honor fallen police officers,” a sentiment that’s more fraught with meaning with so many first responders risking their lives during the pandemic.

Scott offered to replace the masks “as an affirmation of the principle of safety with respect for all.”