This latest story of racist violence in America is only just now getting attention.

It was only when a graphic video of the cold blooded murder surfaced that State law enforcement authorities stepped in and arrested the father and son.

In custody: Gregory McMichael above and son Travis below.

A four-vehicle convoy from the Georgia Bureau of Investigation pulled up outside the home of Gregory and Travis McMichael at 7.50pm Thursday to take the men into custody on charges of murder and aggravated assault.

The Georgia Bureau of Investigation released a statement shortly after the swoops saying the two men were arrested on suspicion of murder and aggravated assault.

And in a fresh twist, the agency said it was also investigating threats made towards its officers and people involved in the investigation.

The dramatic arrests come days after leaked cellphone video of the McMichaels’ fatal confrontation with Ahmaud Arbery on February 23 made headlines nationwide, sparking fevered outrage and demands for justice.

The shocking footage showed the two men ‘ambushing’ Arbery as he tried to run past their pickup truck, the younger McMichael getting into a physical fight with Arbery before shooting him with a shotgun.

The father and son were initially not arrested after they claimed they thought Arbery was a burglar after a spate of thefts in their area, and that he attacked them when they tried to make a citizen’s arrest.

The Georgia Bureau of Investigation took over the investigation on Tuesday after a graphic video of the murder emerged.

They entered the house just before 8pm and emerged minutes later with Gregory McMichael, 64, in handcuffs.

Wearing a scruffy black shirt, cap and jeans the retired cop stared straight ahead and ignored questions from DailyMail.com as he was placed in a police car.

His son Travis, 34, emerged moments later without a struggle, wearing a checked shirt, cap and jeans.

He said nothing as he was led to a vehicle in handcuffs.

Locals emerged from their homes to watch the dramatic swoop, with two people verbally abusing a DailyMail.com photojournalist, calling him ‘scum’ and ordering him to leave.

Investigators were at the house for about ten minutes before the left as abruptly as they had arrived.

A middle-aged woman carrying a young child walked out of the $280,000 family house, looked up and down the street, before going to a neighbor’s home. 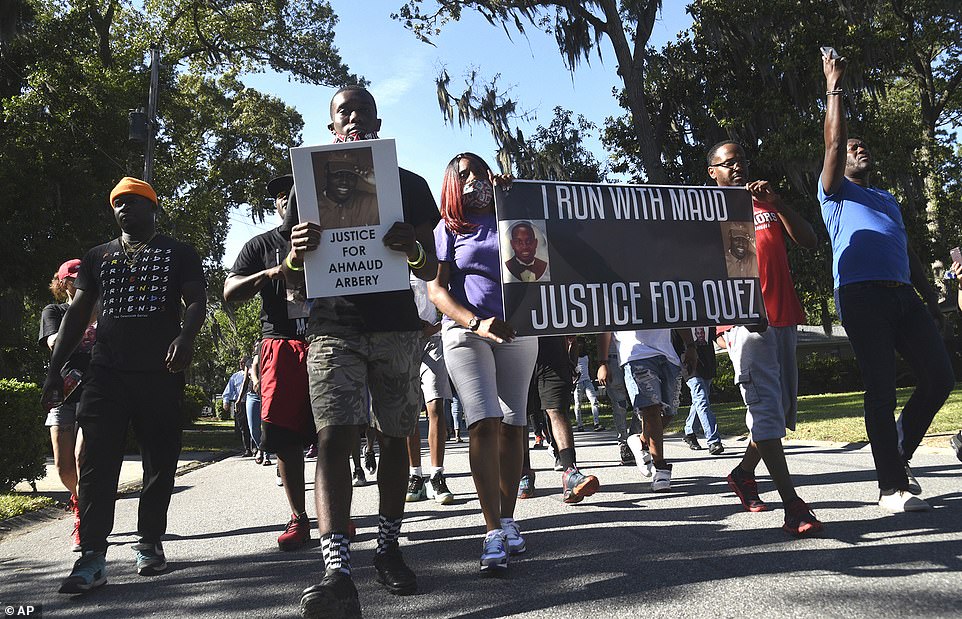 ‘They heard about it on the news like everyone else,’ he said.

‘Wanda was extremely relieved but she remains very stoic as she has been since this all started.

‘It’s a huge, huge step but it’s only a first step on a very long road to justice.’

Merritt said he was heartened by the fact the Georgia Bureau of Investigation had stepped up after the original team of police and prosecutors assigned to the case ‘failed in their duty’ to make arrests.

Arbery’s mother, Wanda Cooper Jones, has said she believes her son, a former football player, was just jogging in the Satilla Shores neighborhood before he was killed on a Sunday afternoon.

Gregory McMichael told police he suspected the runner was the same man filmed by a security camera committing a break-in. He and his grown son, Travis, grabbed guns and began a pursuit in the truck.