People are taking to the streets by any means necessary to protest the police murder of George Floyd a week ago.

Brianna Noble didn’t plan to ride her horse into the George Floyd protest in Oakland, but it was her way of doing something positive.

Noble hadn’t planned to ride her horse, Dapper Dan, into the center of Friday evening’s protests in the city of Oakland. “It wasn’t a very planned thing,” the 25 year-old Bay Area native told the Guardian. “I was just pissed, sitting at home and seeing the video of George Floyd. I felt helpless and thought to myself: ‘I’m just another protester if I go down there alone, but no one can ignore a black woman sitting on top of a horse.’”

Noble was among thousands of protestors who had come out on Friday to decry the killings of George Floyd in Minneapolis and Breonna Taylor in Louisville and to call for charges against three former police officers involved in Floyd’s arrest. A fourth former officer, Derek Chauvin, has been charged with third-degree murder and manslaughter.

As night fell in Oakland, people ransacked retail stores such as Target, broke into car dealerships and set multiple fires. These incidents – and images of burning buildings and broken windows across the US – have become defining images of this most recent round of protests. 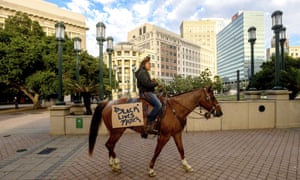 Noble says that this focus on destruction was another motivator for her to bring her horse Dapper Dan into downtown Oakland.

“I know that what makes headlines is breaking windows and people smashing things,” Noble said. “So I thought: ‘Let’s go out and give the media something to look at that is positive and change the narrative.’”

Noble, who trains feral and wild horses, also works to change narratives in the equestrian world which, in California, is majority white and has a high financial barrier to entry. She hopes that, in addition to contributing to the movement against police brutality toward black and brown people, to become the first black woman to do horse jumping in the Olympics and bring low-income kids into the horse community.

“I don’t want to be known for just walking down Broadway one time,” Noble said. “I want to make a lasting impact in my community for black and brown people.

“When you’re black it doesn’t matter how loud you scream or how deep your words are, nobody would listen,” she continued. “So to now have found this amazing pedestal – my horse Dapper Dan to sit upon – and not have to say a word is amazing.”