The justifiable outrage being expressed by citizens of Vallejo will likely not generate the  protest which has been the focus of world wide attention following the murder of George Lloyd.  It should.

The police slaying of 22 year old Sean Monterrosa, while kneeling on the ground, is criminal. Another act of police violence.

Less than an hour before he was fatally shot by a Vallejo police officer, 22-year-old Sean Monterrosa texted his older sister with a request.

“Can you help me out by signing this petition?” he asked.

The next message, sent just before midnight Monday, was a link demanding justice for George Floyd, the 46-year-old black man killed a week earlier by a Minneapolis police officer who kneeled on his neck for more than eight minutes.

Monterrosa’s sister “loved” the texts and responded a minute later: “Just did it.” 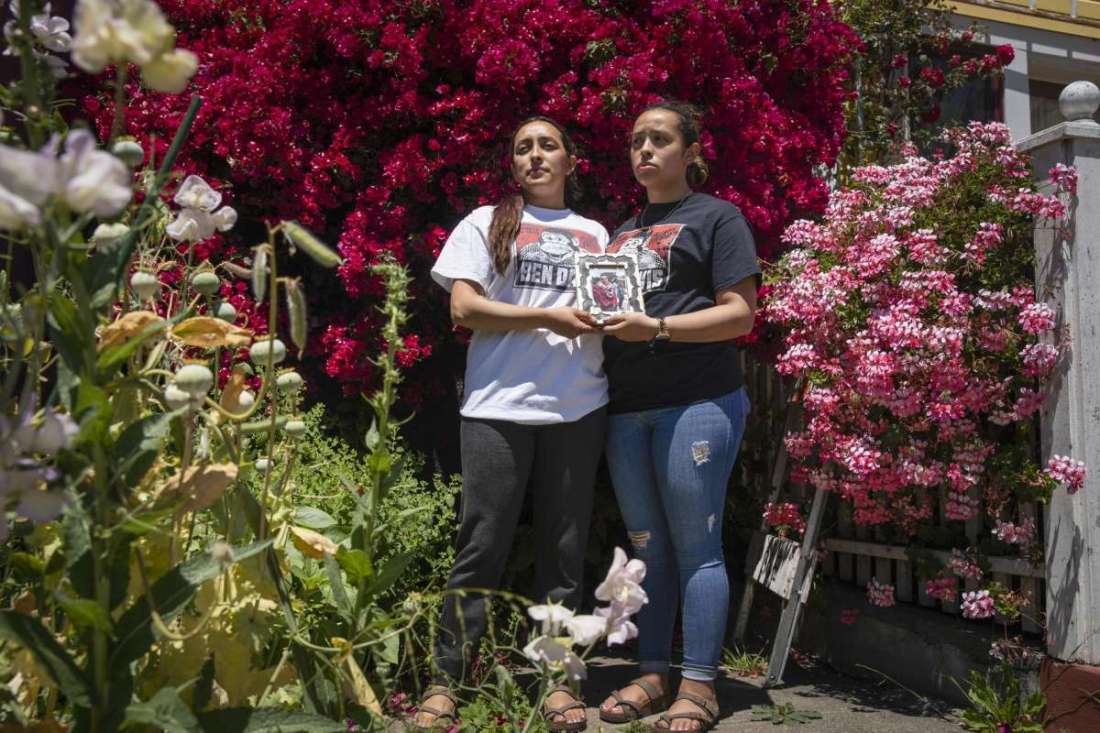 The simple exchange between siblings has now taken on greater significance, as Monterrosa became the second person in the Bay Area to lose his life amid historic protests and clashes with police, as communities across the nation demanded justice in Floyd’s killing and an end to police brutality against people of color. An Oakland security guard was gunned down in the region’s first killing May 29.

The circumstances surrounding Monterrosa’s death have fanned the flames of the local movement: The young man was kneeling and had no weapons in his hands early Tuesday morning when a Vallejo officer opened fire through the windshield of a police cruiser and killed him.

Monterrosa’s family and friends are now launching their own quest for justice, saying the lifelong San Franciscan was “murdered” by police. He was shot at the scene of an alleged looting at a Walgreens, where police said he was a suspect.

“My brother was kneeling and surrendering, yet you shot my brother from your vehicle through your windshield,” Michelle Monterrosa said of the officer, an 18-year veteran of the Vallejo Police department whose identity has not been released. “How much more cowardly can you be?”

He was kneeling outside a Walgreens and not carrying a firearm when an officer opened fire  sending five bullets through his own windshield. Monterrosa, of San Francisco died after the shooting at around 12:30 a.m.
Tuesday, but police did not tell the public the man was killed  or disclose the circumstances of the shooting  until Wednesday at a news conference outside City Hall, a day after calling in 50 troops from the National Guard to help control protests and rioting sparked by the Minnesota police

Over the last 10 days, tens of thousands of people throughout the Bay Area have taken to the streets in protest and hundreds have been arrested or cited on suspicion of looting or breaking curfew, as overwhelmed police forces struggled to keep pace. On Tuesday, Vallejo officials announced they were calling in help from the National Guard.

In interviews with The Chronicle, Sean Monterrosa’s family and friends offered a glimpse into the young life that was cut short in a similar manner to Floyd’s, which has been denounced on all sides.

He was the child of Argentine immigrants and the middle of three siblings, each spaced two years apart. But sisters Michelle and Ashley agree they all felt more like triplets — if you shaved the girls’ heads they’d all be indistinguishable, they said.

Their father was a surgeon in Argentina, but it was nearly impossible for him to go back to school and learn how to be a doctor again in the U.S., especially with their first child on the way. So, for the past 24 years, Neftali Monterrosa has worked at Anchor Oyster bar in the Castro neighborhood, where the Monterrosas were welcomed into the community.

Sean Monterrosa with the family dog, Gucci. Monterrosa was fatally shot by Vallejo police on Tuesday as he was kneeling outside a Walgreens and not carrying a firearm when an officer opened fire.
Photo: Monterrosa family

As a teen, Sean Monterrosa loved drawing, skateboarding and boxing, and he talked about building generational wealth. From an early age, he set his sights on a lofty goals. “He always told my mom, ‘I want to buy you a house,’” Michelle Monterrosa said.

By the time he was 13 or 14 — still unable to legally work — he became set on helping provide for the family, and created his own off-the-books gig. He would troll local nightclubs, like Monarch in the South of Market neighborhood, selling hot dogs to tipsy patrons.

“He’d always laugh and say, ‘They’d give me $100 bills as tips thinking they were a dollar,’” Ashley Monterrosa recalled. But he was too honest, she said, and would try to give the money back. Most of the time customers let the cute kid keep the money.

“They must have seen the light in my brother,” Ashley Monterrosa said. “Even though they’re out having a good time, they’re like, ‘Let’s provide for this kid.”

In high school, Sean Monterrosa was “an athlete that wanted to be a ladies man,” said Rafael Resendiz, his best friend.

“He used to love reading, and he was always trying to get me to read,” Resendiz said.

Williams said Monterrosa appeared to be running toward a suspect vehicle just after 12:30 a.m. Tuesday when he suddenly dropped to his knees and brought his hands above his waist, revealing what an officer mistook for the butt of a firearm.

The officer, who was in a vehicle, unloaded five shots through his own windshield, striking Monterrosa once. The object the officer saw tucked into Monterrosa’s sweatshirt pocket was actually a 15-inch hammer, Williams said.

Resendiz and the Monterrosa sisters pushed back on this image of their brother.

Ashley and Michelle Monterrosa said Sean Monterrosa was never convicted of a crime, and that he was currently facing charges for shooting a firearm into the air on New Year’s Eve three years ago.

“It’s not fair the way the Vallejo PD had presented their case to the whole public — they gave a false narrative,” Michelle said.

Between 2015 and 2017, Monterrosa participated in the Lifeworks program at Horizons Unlimited, which aims to help youth develop career and job skills.

He became a voracious reader and developed into a mentor who wanted to help other kids develop a love of learning.

“He was a natural born leader,” Abdul-Shakur said. “He was very compassionate, kind and thoughtful. He was always concerned about not getting other people upset.”

Abdul-Shakur last saw Sean Monterrosa about two years ago, during one of his occasional visits to give a hug, and say hello and thanks. She learned of his death Tuesday from other Horizon alumni. She wants him to be remembered as a leader and friend.

“It’s important to focus on who he was and not focused on tactics of the police to criminalize him,” Abdul-Shakur said. “We will continue to uplift his image.”

In the past few years, Sean Monterrosa had worked as a security guard and more recently as a carpenter. He loved learning, creating and doing things with his hands, the sisters said.

“He’s been arrested a few times wrongfully, (and) because of the way he looks he’s been stereotyped,” Ashley said. “He has tattoos, he dresses a certain type of way — they would always try and stop him.”

The sisters said they had no idea what their brother was doing early Tuesday morning in Vallejo. In the middle of the night, they received a hysterical call from his girlfriend who said she was talking to him when she heard gunfire.

All three siblings share location data on their phones, so the sisters set out to try and find him in the middle of the night. Sean Monterrosa’s last location pinged at 1050 Redwood St. in Vallejo — the address of the Walgreens where he was shot.

Police and hospital staffers refused to provide any answers, and it wasn’t until the following morning when the sisters began calling mortuaries and their worst fears were realized.

The family is now represented by civil rights attorney John Burris, who attended Wednesday’s press conference and called the circumstances of the police shooting “disturbing.”

“He hadn’t done anything to threaten the officer or anyone else,” Burris said, stressing that Sean Monterrosa was on his knees when he was shot. “Even if it had been a gun, he did not try to pull it out. There was no basis to shoot him. He overreacted.”

Sean Monterrosa was scheduled to start a new carpentry job Friday. He was planning to buy his mom that house, and with his skills he could fix it up, his sisters said. He wanted to take classes, build generational wealth and give back to his family.

“One thing my brother would always say is: knowledge is power,” Ashley said. “So, we always have to pursue the (best) education that we can, get our parents the American dream, and give them everything they deserve.”