It mattered not that Ralph Barbieri was a fixture in San Francisco sports talk radio.

When Ralph told his corporate owners that he had Parkinson’s Disease he was fired several months later. It’s small consolation that Ralph did the American thing.  He sued corporate management and prevailed.

The psychological damage caused by having to engage the American legal system is daunting, time consuming and depressing.

There are no victors in the legal system. Ralph may have won the battle but ultimately lost the war. It was a pyrrhic victory.

Rest in peace Ralph. I loved your show.

Longtime San Francisco radio personality Ralph Barbieri died at his home in Novato on Monday after a long battle with Parkinson’s disease. He was 74.

Barbieri was dubbed “Razor Voice” many years ago by the late Chronicle columnist Herb Caen because of his raspy, high-pitched delivery.

“Even though we knew it was coming, it was still a mule kick,” Tolbert said Monday.

“I loved the guy. I loved working with the guy. I don’t think anyone will ever have the magic that we had.”

“What a character, what an iconic voice if you’ve lived in the Bay Area,” said A’s manager Bob Melvin, a Palo Alto native and UC Berkeley alum. “It takes you all of two seconds to know when Ralph Barbieri is on the radio. Really sad, heavy heart.”

He signed off each show with a quote from British novelist and poet G.K. Chesterton: “Angels fly because they take themselves lightly.”

In 2005, Barbieri was diagnosed with Parkinson’s disease, a degenerative disorder of the central nervous system. He didn’t disclose his illness to KNBR management and his listeners until 2011.

Six months after his announcement, he was fired in April 2012. He sued KNBR’s parent company, Cumulus Media, alleging discrimination based on his age (then 66) and his illnesses. 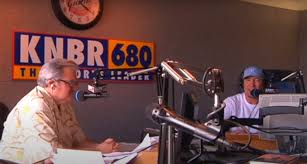 At the time, Cumulus vice president Bill Bungeroth called the charges “baseless,” pointing out that the company knew about his illness when it renewed his contract the previous fall. He said Barbieri was let go because he refused to honor the terms of his contract. In 2013, the suit was settled for an undisclosed amount, believed to be more than $1 million.

As Chronicle columnist Scott Ostler wrote in 2011, Barbieri went into “full attack mode” when he first got the Parkinson’s diagnosis, going to the Mayo Clinic in Minnesota and even a mystical healer named John of God in a remote corner of Brazil. Barbieri’s medical approach, Ostler wrote, eventually included acupuncture, Chinese herbs, meditation, yoga, exercise and about 85 pills a day, mostly herbs.

For more than a decade, Barbieri said, he became almost obsessed with becoming a father, even though he never wanted to be married. Through in vitro fertilization with a surrogate mother, his son, Tayte Ali, was born in 2000, and Barbieri embraced his new role as a father.

He told an interviewer in 1992, “I spent the better part of 25 years carousing and leading the single life.” After three drunken-driving charges in a 12-month period, he had entered a 120-day treatment program in 1995. He later said he swore off alcohol and drugs when he became a father.

Raised in Millbrae, he attended the University of San Francisco on an academic scholarship — he was a member of the cheerleading squad — and earned a degree in political science with a minor in philosophy. He received an MBA at Penn and worked in advertising in New York for a year and a half.

After returning to San Francisco, he decided to write an article about Bill Walton, the iconoclastic center of the Portland Trail Blazers. They met in a hotel in Oakland, where the Blazers were playing the Warriors. Barbieri accepted an invitation from Walton to spend a week at his home in Oregon to let him see how he lived. Barbieri eventually sold the long story to Sport magazine.

After he wrote a cover story for Sport on decathlete Bruce Jenner — who would win gold at the 1976 Olympics in Montreal — he made a guest appearance on Scotty Stirling’s radio show on KNBR. Barbieri decided that talk radio was what he wanted to do.

Following the sale of KNBR by NBC to Susquehanna Radio Corp. in 1989, general manager Tony Salvadore gave Barbieri the “SportsPhone 68” nighttime sports-talk show after hearing him sub for Dave Newhouse. Salvadore wanted somebody more controversial. Eventually, Barbieri was shifted to the prized afternoon-drive slot as the station moved to a 24-hour all-sports format.

Barbieri is survived by his son, Tayte, and his sister, Annette Dell Osso of Novato.