The wanton murder of 22-year old Sean Monterrosa in June by a Vallejo cop is a disgusting outrage.

Coming close on the heels of George Floyd’s murder in May by a Minneapolis cop it’s further proof that cops in America have license to kill at will.

The family of Sean Monterrosa is seeking judicial relief for their son’s murder. It will not bring him back. The American judiciary system is flawed. But, at least the family has a forum in which to express its grief and anger.

In addition to this civil action the cop who shot Sean Monterrosa needs to be charged with murder. Sadly and predictably prosecutorial authorities are treading water and have nearly two months after the crime failed to charge the cop.

The family of Sean Monterrosa sued the city of Vallejo and police Officer Jarrett Tonn on Thursday, accusing Tonn of panicking and fatally shooting the 22-year-old San Franciscan from an unmarked police vehicle with no provocation on a night of racial justice demonstrations in June.

“We have no moment to grieve. All we can do is turn this tragedy to power,” Monterrosa’s older sister, Michelle Monterrosa, said at a news conference announcing the lawsuit in front of Vallejo City Hall. “It’s hard — we lost our only brother. This is not the end. We will do everything we can to make sure my brother gets justice.”

Oakland civil rights attorney John Burris, who filed the wrongful death suit in federal court for the family, called Tonn “a trigger-happy officer and potentially a homicidal officer” who is “clearly not a person who should be in a Black and brown community” doing police work.

“This officer in my view was a panicky guy … scared to death of any little thing,” Burris said. “That is unconscionable to me.” He called the shooting “flat-out murder.”

The city and Police Department were barred by a Solano County judge from naming the officer involved in the shooting after the Vallejo Police Officers’ Association sought a temporary restraining order to protect the officer’s identity. Tonn, however, was named in the 15-page lawsuit.

It describes the killing of Monterrosa as “brutal, malicious,” and done while he was kneeling outside a Walgreens store on the 1000 block of Redwood Street in Vallejo at 12:37 a.m. on June 2.

Monterrosa had a hammer in his sweatshirt pocket that Tonn said he thought was a firearm, but he held nothing in his hands.

Police had arrived to investigate reports of looting at the end of a night of racial justice demonstrations when Tonn opened fire with an AR-15 semiautomatic rifle from the backseat of a police pickup truck without yelling warnings of lethal force, the complaint said. He allegedly fired five shots through the windshield, hitting Monterrosa in the neck. A bullet fragment emerged from the back of the victim’s head.

It was Tonn’s fourth shooting in five years, according to the suit. Burris said Tonn’s history “raises real questions about his suitability or fitness to possess weapons.”

Efforts to reach Tonn were unsuccessful.

Burris criticized Tonn’s colleagues for reassuring and even “coddling” Tonn as Monterrosa lay dying in the store parking lot. Digging through police records, Burris was unable to find reports of discipline or counseling after Tonn’s other shootings, the suit says.

Burris also contended Thursday that the Vallejo Police Officers’ Association tried to cover up for Tonn by saying Monterrosa was crouching and reaching for his waist, as if preparing to attack, contrasting Police Chief Shawny Williams’ initial description of Monterrosa being on his knees and raising his arms. Williams later changed his description to match the union’s, and he told The Chronicle he was merely clarifying the “narrative.”

“We have a problem here in Vallejo,” Burris said. “We can’t trust what they (police union leaders) have to say.”

A lawyer for the union declined to comment Thursday. The union issued a statement defending Tonn, saying: “Fearing that Mr. Monterrosa was about to open fire on the officers in the vehicle, the officer was forced to fire multiple rounds through his windshield. The officer used deadly force as a last resort because he had no other reasonable option to prevent getting shot.”

A spokeswoman for the Vallejo Police Department, Brittany K. Jackson, did not address the specifics of the lawsuit but expressed sympathy for the Monterrosa family.

The Vallejo police have drawn community condemnation in recent years for a string of deaths at the hands of officers. Those include Willie McCoy, a 21-year-old man who was shot to death by officers last year after he fell asleep with a gun in his lap in his car in a Taco Bell drive-through, Ronell Foster, a bicyclist who was shot to death in 2018 after an officer chased him into a dark alleyway; and Angel Ramos, who was killed by police at his home in 2017 after a report of a fight.

And last week, Chief Williams said he was looking into allegations by a former police captain that officers had bent their badges to mark on-duty killings.

Solano County District Attorney Krishna Abrams recused herself from investigating the McCoy and Monterrosa cases, saying that Becerra should investigate them instead. But his office has declined to review either case, saying Abrams had no conflict of interest that would prevent her from deciding whether to file charges against officers in the case.

“This is a moment where (Attorney General) Becerra steps up like a real man and takes on this case,” Nora Monterrosa, the victim’s mother, (pictured below left) said in Spanish at the news conference. 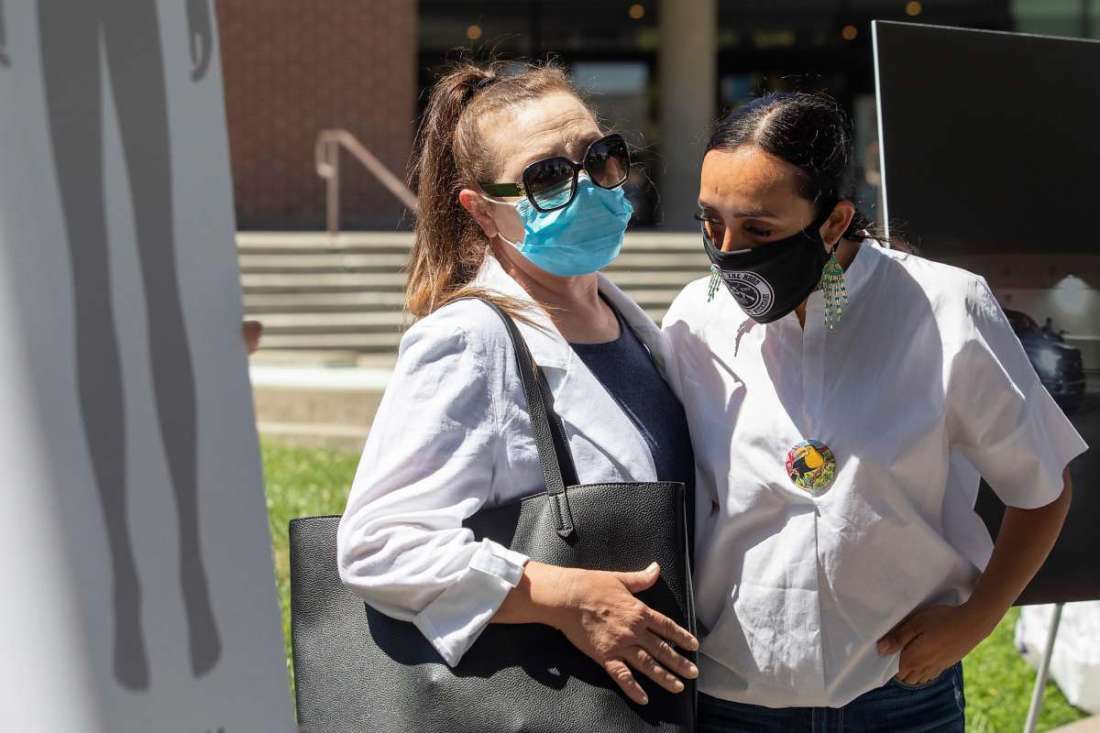 Separately, Becerra plans to investigate the Police Department’s disposal of key evidence in the incident: the windshield through which Tonn allegedly fired his weapon. The windshield was destroyed after the shooting, and Thursday’s lawsuit contends that in disposing of the glass, the city deprived the family of valuable evidence and “ratified and condoned” Tonn’s actions.