While the Pandemic rages and Trump is trying to steal the election even more evil is being done to the environment.

Even Goldman Sachs and Wells Fargo refuse to become involve in the destruction of the Alaskan wilderness.  This latest outrage by Trump is yet another reason this guy needs to be sent into exile next January.

WASHINGTON—The Trump administration approved an oil leasing program for the Arctic National Wildlife Refuge on Monday, opening up the pristine 19-million-acre wilderness to drilling for the first time and making it difficult to unwind the decision should Democrats recapture the White House in November.

Approving the program clears the way to auction oil leases “right around the end of the year,” Interior Secretary David Bernhardt said in an interview. The decision caps more than 30 years of efforts by oil companies and Alaskan leaders to drill in the refuge.

“We take our direction from the president. The president has been very robust on opening additional areas of federal lands, as appropriate, to resource development,” Mr. Bernhardt said. “We’ve tried to hit his priorities as expeditiously as we can—with appropriate deliberation.”

Environmentalists have raised concerns about the impact drilling could have on the polar bears and caribou herds that live in the remote refuge in northeast Alaska. Congress passed a mandate to lease oil rights in part of the refuge in its tax overhaul in 2017, when both the House and Senate were in Republican control.

Mr. Bernhardt said the drilling can be conducted in an environmentally sound manner and that Congress has set details into law that will help the plan withstand challenges from environmentalists.

The refuge, often known by its acronym ANWR, is nearly the size of South Carolina, nestled between the Arctic Ocean to the north and Canada’s Yukon to the east. Congress approved protections for it in 1980, and its expansive tundra, mountains and coastal plain are still nearly void of people and roads. 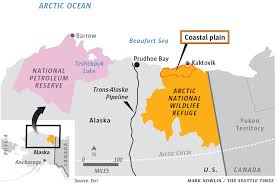 Investors question its value, however, as a source of oil, especially in an era of lower crude prices and tepid demand. The industry is glutted with supply world-wide, pushing companies of all sizes to plan deep spending cuts.

The reserves in ANWR are uncertain and drilling there appears unpopular with the public. Combined with the sheer expense of entering Arctic wilderness for the first time, it might all chase away several of the major companies that could afford such a capital outlay.

Goldman Sachs Group Inc. and Wells Fargo & Co. are among several banks to rule out funding for ANWR drilling specifically, and more have broadly ruled out financing for Arctic development.

BP PLC, a pioneer of Alaska oil, decided last year to sell all of its assets in the state even with an ANWR auction pending—only to see the deal temporarily delayed this spring while falling oil prices caused major banks to balk at financing the buyer, Hilcorp Energy Co.

Financiers are concerned about climate change and low oil prices, and that is likely to keep oil companies from lining up to drill in the refuge, said Quincy Krosby, chief market strategist at Prudential Financial Inc., which manages more than $1 trillion in assets.

“Investors, with the energy companies, they don’t want a backlash from university endowments, sovereign-wealth funds and so on,” Ms. Krosby said. “But, more importantly, I go back to the economic fundamentals: Why do you have to go there for oil?…The optics at this stage don’t bode well for this sort of endeavor.”

Mr. Bernhardt reiterated the department’s assertion that oil drilling can be done in the coastal plain along the Arctic Ocean, at the northern tip of the refuge, without spoiling the area. The Interior Department says drilling pads, processing plants and roads needed for drilling will take up just 0.01% of refuge’s 19 million acres.

Oil development threatens wildlife and is likely to worsen climate change, according to the Alaska Wilderness League, one of the groups that has opposed opening the Arctic refuge to drilling.

“Our climate is in crisis, oil prices are cratering, and major banks are pulling out of Arctic financing right and left,” Adam Kolton, the group’s executive director, said in a statement Monday. “This rush to drill would culminate in a fire sale of our nation’s most iconic wilderness.”

Alaska has been rocked in recent years by steep drops in both production and exploration. A boom in shale drilling elsewhere has drawn drillers to easier-to-reach and less environmentally sensitive areas, and state leaders have urgently sought ways to lure them back.

When the Interior Department’s Bureau of Land Management finished its environmental impact statement on the project last year, Alaska’s congressional delegation and other state leaders urged the department to move forward quickly on leasing the refuge. Sen. Lisa Murkowski (R., Alaska) said it would “strengthen our economy, our energy security, and our long-term prosperity.”

“This is a capstone moment in our decadeslong push,” Ms. Murkowski said in a statement. “New opportunity…is needed both now, as Alaskans navigate incredibly challenging times, and well into the future as we seek a lasting economic foundation for our state.”