Trump is taking America down the road of Fascism as he rolls out his re-election campaign.

A toxic blend of racist taunts, law and order rhetoric, a bow to the Christian religious right and an attack on the entire progressive movement in America.

It’s bad and will only become worse. 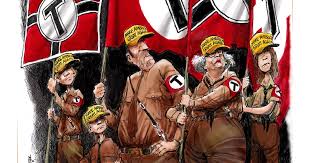 “You won’t be safe in Joe Biden’s America,” Vice President Mike Pence said from an outdoor stage lined with American flags. “Under President Trump…we’re not going to defund the police—not now, not ever.” He added, to cheers from the audience: “We will have law and order on the streets of this country.”

The focus on Mr. Trump’s support for law enforcement follows three nights of violent clashes, fires and looting in Kenosha, Wis., after police there shot Jacob Blake, a 29-year-old Black man, in the back on Sunday, leaving him paralyzed for now.

Vice President  Pence hailed President Trump’s support for law enforcement during what he called a “time of testing” spurred by recent protests against police shootings and the coronavirus pandemic, as he accepted the Republican Party’s vice-presidential nomination Wednesday.

Since the killing of George Floyd in police custody in May spurred nationwide protests against police brutality, Mr. Trump has made clear he is more aligned with law enforcement than with the protesters. The Republican National Convention—where speakers cast the president as the champion of law enforcement and attacked his Democratic rival, former Vice President Joe Biden, for being sympathetic to protesters—has thrown that alignment into sharper relief.

Mr. Pence, who spoke from Fort McHenry, the site of a War of 1812 battle that inspired the writing of “The Star-Spangled Banner,” sought to tie Mr. Biden to efforts among some Democrats and liberal groups to defund police departments in response to cases of police brutality and racial inequity. The Democratic presidential nominee’s campaign has said he opposes efforts to defund the police, but would seek “transformative change” to the criminal justice system.