The insidious manner in which Mark Zuckerberg controls the media narrative all under the guise of free speech is reprehensible.

Facebook’s real goal is to make money. It’s value is approaching a TRILLION dollars. Its share price is nearly $300.00.

There are no ethics involved where it concerns Mark Zuckerberg. It’s all about money under the touchy feely mantra of “free speech.” 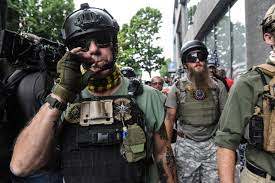 According to the Verge, the company received at least two complaints from users regarding the self-proclaimed militia group The Kenosha Guard prior to Tuesday’s shooting that saw two protesters killed and another injured in the Wisconsin city, which has been rocked by demonstrations since the police shooting of Jacob Blake on Sunday.

The alleged shooter, Kyle Rittenhouse, had apparently responded to a Facebook callout issued by The Kenosha Guard urging people to “take up arms and defend our city tonight from evil thugs,” a post later amplified by far-right site Infowars, according to the Milwaukee Journal-Sentinel.

Facebook initially opted not to act on the complaints about Kenosha Guard because they did not violate the platform’s community standards, the Verge reported, though the company took down the page on Wednesday. When asked for comment, Facebook told the Verge that its investigation had not shown a direct link between the shooting and the Kenosha Guard account.

Rittenhouse, who reportedly expressed support for “Blue Lives Matter” and was spotted at at least one rally for Donald Trump, also appeared to consider himself part of a militia, though it’s unclear which one. On Tuesday, he allegedly walked past a group of police while carrying a rifle over his shoulder and was not stopped or questioned. Rittenhouse has been charged with first degree intentional homicide. 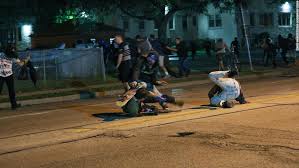 Since the beginning of the year, Facebook has come under increased scrutiny for its failure to act on the issue of far-right groups. Mark Zuckerberg has held that freedom of speech ought to be paramount, deflecting any culpability. The tension has reportedly come to a head inside the company itself. In June, several employees held a virtual walkout to protest Facebook’s decision to leave untouched a post by Trump inciting violence in the wake of George Floyd’s killing by police. Some staffers reportedly threatened to resign. “Something big is happening,” Bloomberg’s Kurt Wagner said at the time. “In the many years I’ve covered [Facebook], I’ve never seen this kind of public criticism before.”

Although the company has recently begun to ban pages related to QAnon and the Boogaloo movement, it remains a home for far-right outlets including Breitbart and The Daily Wire; news sites known for spreading conspiracy theories and misinformation. Users and researchers in Europe and Canada have likewise lodged complaints at the ease with which far-right and white supremacist groups have been able to take advantage of the platform. When asked why Facebook had chosen to place Breitbart on its news tab last year, Mark Zuckerberg said, “Part of having this be a trusted source is that it needs to have a diversity of views in there, so I think you want to have content that represents different perspectives.”