The continuing presence of Neo Nazis in Germany is a threat to that nation’s democracy as the Deutsche Welle report shows.

The abhorrent Nazi philosophy did not disappear with the smashing of Hitler’s regime in 1945. It just went underground. Now, 75 years later its presence is felt throughout Germany.

QAnon is a parallel movement in America. The Trump Administration looks the other way and encourages QAnon by its indifference.

Neo Nazis in Germany and QAnon in America are a danger to democratic institutions.  The difference right now is that the German government is cracking down on  Neo Nazis.

Police squads raided 34 private homes and bureaus of colleagues across the western state of North Rhine-Westphalia (NRW) on Wednesday, over what the state’s interior minister, Herbert Reul, described as “the worst and obnoxious” content.

At least 5 private WhatsApp chat groups — the oldest dating back to 2013, the latest to 2015 — contained 126 electronic images, including photos of Adolf Hitler and a fictional depiction of a refugee in a gas chamber, Reul said.

Frank Richter, Essen’s regional police chief, said he was shocked that none of the accused had reported the image distributions — all on private phones — to their superiors. None had exhibited suspicious behavior, Richter added.

Fourteen of them were likely to be sacked, said Reul, with 11 who actively distributed material facing criminal proceedings for alleged incitement.

Read more: How the German media failed the victims of far-right NSU terror

The rest could also face disciplinary proceedings. Among the 29 suspected officers, 25 were based in Essen, a central 583,000 population hub in NRW’s Ruhr District.

At a Wednesday press conference, Reul described the alleged far-right behaviors by suspected officers as a “disgrace” that sullied the state’s 50,000-member police force.

“Right-wing extremists and neo-Nazis have no place in the North Rhine-Westphalian police force, in our police force,” Reul said. “At first I did not want to believe that there really was such a thing.”

A special investigatory commissioner would be appointed, said Reul, who in recent weeks, prior to last Sunday’s NRW communal elections, had highlighted crackdowns on mafia-like gang structures in Germany’s most populous state and  child abusers.

Wednesday’s searches were carried out by some 200 officers in Essen as well as in the cities of Mülheim an der Ruhr, Oberhausen, Moers and Selm, according to prosecutors in Duisburg.

Private phones and “extensive” evidence on storage devices were seized.

Reul said he expected further disclosures as those phones were examined.

The initial chat-group phone belonged to a 32-year-old police officer in Essen, suspected of forwarding information to a journalist.

“The police must be neutral and always keep their feet on the ground of liberal democratic precepts,” said regional DPolG union Chairman Erich Rettinghaus.

“The battle against right-wing extremism belongs to the DNA of the police,” said regional GdP Deputy Chairman Michael Maatz in Düsseldorf.

“The fact that there are, nevertheless, officers, who share right-wing extremist xenophobic contents in chat groups is unbearable,” added Maatz. 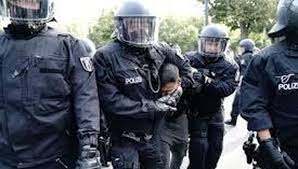