Right until the end of her 99 yearlife Edie Locke was involved in fashion criticizing people in 2020 who refuse to wear protective masks during the pandemic, “Stay the hell away from poisoning your fellow women and men.”

In her late 90s, Edie Locke kept in touch with friends by texting and wrote a column for the newsletter published by her senior living home in Thousand Oaks, Calif. A few months ago, writing about the social and fashion implications of pandemic face masks, she noted that some people refused to wear them: “To each his own? Okay, but stay the hell away from poisoning your fellow women and men.”

The teenage Edie Laub, growing up in Vienna, knew about anti-Semitism. Still, when Nazi troops occupied Austria in March 1938, she was stunned by the reaction of schoolmates she considered friends. “Open the windows,” one shrieked. “It stinks of Jews.”

In an unpublished memoir, she recalled as Nazi troops marched down her family’s street in Vienna. Along with her mother, she was forced to join other Jewish women scrubbing floors at a Nazi headquarters.

A year later, after months of waiting, the 17-year-old obtained a visa, said goodbye to her parents and fled to Brooklyn to live with relatives. In New York, she worked her way into advertising and fashion journalism and—under her married name, Edie Locke—served as editor in chief of Mademoiselle magazine in the 1970s, when it was still influential in both fashion and literature. 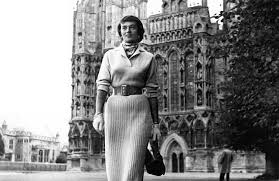 Ms. Locke, who died Aug. 23 at the age of 99, mentored young designers, including Betsey Johnson, Ralph Lauren and Donna Karan. As editor in chief, she carried on the magazine’s literary traditions and hired Joyce Carol Oates to review books. The magazine, she said later, “combined fashion and beauty with feeding the mind.”

In the mid-1960s, she advised women who were contemplating the purchase of miniskirts: First, try it on, sit down in front of a mirror, cross your legs and “look at yourself realistically,” she wrote. Culottes or tent dresses were alternatives.

“Today’s reader wants to be shown, not told, about fashion, beauty or anything,” she told Women’s Wear Daily in the 1970s. “We will stay away from ‘this is how you must look.’ We’ll make a statement but not a dictation. We won’t give them any hope, no promises.”

Her advice to women seeking to break into the fashion world: “Take any kind of a job, clerical or secretarial, to get your foot in the door. It won’t take long for talent to be noticed.”

Executives at the magazine’s publisher, Condé Nast Publications, pressed her in the late 1970s to adopt a lighter and sexier tone, closer to that of Cosmopolitan. She resisted and was fired in 1980. Months after her departure, Mademoiselle published a guide to vibrators. “Everything became about sex and relationships,” she said later. Publication of the magazine ended in 2001.

Ms. Locke reinvented herself as a television personality. In 1981, she debuted as producer and host of the cable television series “You!” It featured fashion, diet and careers. She was later co-host of a fashion segment on a Lifetime cable show.

Edith Rosenberg Laub was born on Aug. 3, 1921, in Vienna, where her father was a buyer for a department store. She served as a tutor in Latin and math at her high school but was ejected, along with other Jewish students, after Nazi Germany’s annexation of Austria in 1938.

In 1939, she said goodbye to her parents at a train platform. At the border, guards confiscated her cheap watch, frisked her to make sure she had no other valuables and allowed her to keep the equivalent of $5 in cash. She traveled by train to Cherbourg, France, and crossed the Atlantic to New York on the Aquitania ocean liner. Her parents, after spending the early 1940s in England, joined her in New York.

“My German accent was atrocious,” she wrote later. A friend held tissue paper in front of her mouth and asked her to repeat words containing “th” and “wh” sounds. “If the tissue did not move, I had said the words correctly. His method worked.”

At an underwear factory, she was fired after a day because she couldn’t operate the sewing machines properly. Later she found a job packing toothbrushes into boxes and took evening courses at Brooklyn College.

She talked her way into a secretarial job at Harper’s Bazaar magazine and then worked for an advertising agency, where she wrote a fashion newsletter. Betsy Blackwell, editor in chief at Mademoiselle, noticed her articles and hired her as an assistant fashion editor in the early 1950s.

Mademoiselle sent her on overseas trips to supervise fashion-photo shoots, including one of a model riding a camel. In the early 1960s, during a visit to St. Croix in the U.S. Virgin Islands, she met Ralph Locke, who managed the Buccaneer hotel. They married in 1963.

Ms. Locke is survived by her husband along with their daughter, Katie Aviv, and three grandchildren.