Let’s give a big shout out to The Libertarian Party, arguably the Green Party of the 2020 election.

In 2000 The Green Party cost the Democrats the White House when Ralph Nader got 95,000 votes in Florida.  For those who forgot or have amnesia to keep from going crazy, the Supreme Court stopped the vote count when George W. Bush was ahead by 537 votes. Five Justices, including Clarence Thomas, handed the election to the Republicans.

Speaking of Clarence, I hope he remembers that were it not for the mishandling of his confirmation hearing by Judiciary Chairperson Joe Biden, yes that Joe Biden, Clarence would not have been confirmed and spent the last nearly 30 years trashing American’s civil liberties. 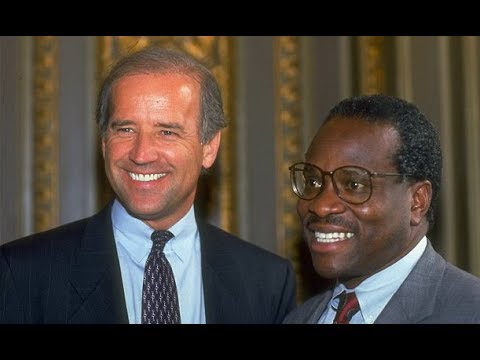 There he is. Joe Biden smiling with Clarence Thomas in 1991

Read Jane Mayer’s piece in The New Yorker. Trump is concerned and angry he’s going down.  Why?  Trump is facing criminal investigations at the State level along with myriad problems in his Grifter financial empire.  He owes hundreds of millions. The IRS is closing in.  Most important and a fact the MAGA, Proud Boys, QAnon and assorted deplorables  and their AK-47 toys ignore is the fact Trump is a spoiled brat. Trump can’t stand to lose even though he is now and always has been a LOSER.

In 2000 the Green Party was accused of ruining things for the Democrats. Did Ralph Nader throw the election from Al Gore to George W. Bush? The cognoscenti are still divided, but the 2020 parallels are strong. Probably most Green voters would have gone Democratic if forced into a binary choice. Similarly, on the Libertarian-O-Meter, Mr. Trump scores much higher than Mr. Biden.

Yes, the Donald is a protectionist, and free trade is the preferred policy of those who favor economic and personal liberty. But when it comes to lowering taxes and easing regulations on business, the party of the elephant is far more closely aligned to the libertarian philosophy than that of the donkey. Mr. Trump has appointed conservatives to the Supreme Court, not libertarians like Randy Barnett, Clint Bolick, Jacob Huebert, Gregory Rome or Brandon Thibodeaux. But supporters of the freedom philosophy prefer judges who adhere to the U.S. Constitution over those who make things up as they go along.

In contrast, Mr. Biden is a puppet in the marionette hands of out-and-out socialists like Bernie Sanders and Alexandria Ocasio-Cortez. Yes, there are some issues on which libertarians are closer to Democrats, such as Oregon’s decriminalization of heroin and cocaine. But these are few and far between.

The national Libertarian Party started in 1971, several state parties earlier. In 1969 I had the honor to run for the New York Assembly. My motto was “Disassemble the Assembly.” I didn’t win; I’m not sure my vote total reached triple digits. But I’ve been a staunch member of the party ever since.

In 2016 physician Donald Miller, historian Ralph Raico and I started a group called Libertarians for Trump. Our advice to libertarian voters was: If you live in Massachusetts or California, strong blue states, vote for Gary Johnson, the Libertarian nominee. The Republicans will lose big there, and your vote for the porcupine won’t help the donkey beat the elephant. Likewise in Louisiana or Alabama, where Mr. Trump was sure to win. But if you live in a purple state, don’t vote Libertarian. It is crucial that Donald beat Hillary!

I kick myself for not reinstituting this effort in 2019. My thought was that Gary Johnson, a former governor, was well-known and might manage 5% of the vote. He actually registered 3.27%, still more than three times the previous record of 1.06%, set by Ed Clark in 1980. I figured Ms. Jorgenson for 0.25%. She now looks on track to exceed Mr. Clark’s percentage slightly—and hand the presidency to Mr. Biden.

Pardon me while I beat my head against the wall. How could libertarians in purple states be so stupid?

Mr. Block is a professor of economics at Loyola University New Orleans.