His office, overwhelmed in its case load, particularly in a year of increasing domestic abuse during the pandemic is getting short shrift. Supervisor Stefani, herself a one time Assistant District Attorney in a neighboring county, told the DA to “budget within his means to deliver public safety for all San Franciscans.” Stefani knows, absent adequate funding, it’s an impossible task.

If DA Boudin does not prosecute crime he will be pilloried for neglecting the citizenry. It takes money and personnel to do the job. Stefani knows this all too well.

San Francisco District Attorney Chesa Boudin said his office is inadequately funded and unable to fully staff units that investigate homicides and domestic violence cases — a situation, he said, that has reached a “tipping point.”

In an Oct. 29 letter, Boudin told Mayor London Breed and the Board of Supervisors that his office is understaffed and overwhelmed by their caseloads. In the General Felonies Unit, for example, Boudin said his staff is handling between 185 and 229 cases a year, far more than the national standard of 150.

The letter came shortly after the city closed a massive, $1.5 billion budget deficit largely caused by the pandemic, and a few weeks before City Hall learned they had another $116 million deficit to contend with. As many departments faced budget cuts this year, the District Attorney’s Office received a slight increase in its budget from $73.59 million to $73.72 million.

Despite the slight increase, Boudin said his office has still been strained amid the pandemic as “COVID-19 has impacted staffing capacity due to illness, family leave and court closures” that have caused delays in processing court cases. He added that the department’s staffing issues existed long before he took over in January.

Additionally, he said, the short-staffed Domestic Violence Unit has seen a 60% increase in demand for services related to children witnessing domestic violence during the pandemic. The issues have also been “aggravated” by the need to investigate alleged misconduct of a forensic laboratory analyst from the Office of Chief Medical Examiner.

Supervisor Catherine Stefani, the most fiscally conservative member of the board, said Boudin should “be budgeting within his means to deliver public safety for all San Franciscans.” 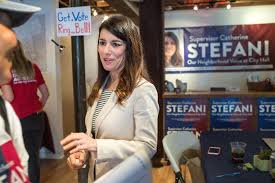 At the beginning of the pandemic, Breed placed a hiring freeze on vacant city positions in an attempt to stave off layoffs and service cuts. Any department that wanted to fill a vacancy had to convince the mayor and board that such a position was essential. The District Attorney’s Office was allowed to hire four of the eight positions they requested, but David Campos, Boudin’s chief of staff, said that was not enough.

“People have to understand that this is serious and we all have obligations and responsibilities,” he said. “But we need the resources.”