The group of nihilistic deplorables who descended on the home of Michigan’s Secretary of State are the absolute worst of the incorrigibles.

It is people like this band of fools that foisted Trump on America.

This country is now reaping the whirlwind of putting such a dangerous, befuddled clown into the White House.

Happily, in 43 days Trump will slither away into the swamp of exile.

A couple of dozen protesters gathered in front of Michigan Secretary of State Jocelyn Benson’s home Saturday night shouting through megaphones against the certification of the election and demanding a forensic audit.

A portion of the demonstration was broadcast live on Facebook around 9:30 p.m. The protesters are seen walking up to Benson’s Detroit home, some wearing President Donald Trump paraphernalia and carrying American flags.

“We are over here in the fricking dead of night, man,” Genevieve Peters, who posted the live video, said as she walked to the house. “We are letting her know that we’re not taking this bullshit election, we are not standing down, we are not giving up you are not going to take this election from a man that has earned it completely 100% by a freaking landslide. Let me tell you: This ain’t over.”

Trump falsely claims that he won the election in Michigan when in fact he lost the state by more than 154,000 votes. Rudy Giuliani appeared before the Michigan House Oversight Committee Wednesday during which he spent more than three hours asking questions of witnesses who accompanied him to the hearing as a means to present what the Trump campaign deems to be evidence of fraud, but was largely conspiracy and misinformation. 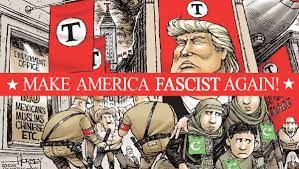