Trump Spent four years undermining a Democratic (and I don’t mean the political party) system of government which has survived over 200 years and finished off his reprehensible term in office with an abortive coup d’etat.

Trump’s bizarro antics have been a boon for those in the medical profession who treat high blood pressure, stress and psychological disorders.

As his days in office dwindle, he’s making everything about him.

President Trump accomplished a great deal in four years, but as he leaves office he can’t seem to help reminding Americans why they denied him a second term.

He could focus on the positive, such as the Covid-19 vaccines and his Arab-Israeli peace breakthrough. Instead he’s calling Members of Congress and asking them to object on the House and Senate floor to the results of the Electoral College count.

This won’t change the outcome, but it will put pressure on Republicans to embarrass themselves by indulging Mr. Trump’s attempts to delegitimize the results. We hope the Members ignore his pleas. 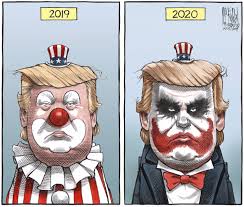 Meanwhile, after days of silence over the hack on U.S. government agencies and private companies, Mr. Trump chimed in Saturday to add confusion. Secretary of State Mike Pompeo said Friday that the evidence clearly points to the Russians for the hack.

But Mr. Trump tweeted that “Russia, Russia is the priority chant when anything happens because Lamestream [media] is, for mostly financial reasons, petrified of . . . discussing the possibility that it may be China (it may!).” Then he linked the hack to a possible “hit on our ridiculous voting machines during the election, which is now obvious that I won big, making it an even more corrupted embarrassment for the USA.”

Mr. Pompeo has no incentive to dissemble about Russia’s role, and Americans deserve to know the truth about what happened. Mr. Trump doesn’t want to admit he lost, and he can duck the inauguration if he likes.

But his sore loser routine is beginning to grate even on millions who voted for him.