It’s puzzling that The New York Times would fire an editor for simply tweeting she had “chills” watching President Biden arrive for his inaugural.

The Times has been so aggressive in going after the deposed Trump. Firing an editor for making a vaguely political tweet seems far fetched.

There must be more to the story.

The New York Times is under fire after terminating an editor who had tweeted that she had “chills” after watching Joe Biden’s plane land as he arrived in the Washington, D.C., area for his inauguration as president.

Numerous journalists and others have posted tweets in support of Lauren Wolfe, saying she has been treated differently from other Times writers and editors involved in controversies.

Wolfe is a distinguished journalist who has reported extensively on rape and sexual assault during the civil war in Syria as well as a politician in Congo, who, with members of his private militia, had been raping toddlers. In addition to her work for the Times, she has written for The Atlantic, The Guardian, and many other publications, and served as director and creator of WMC WomenUnderSiegeProject.org, a journalism initiative on sexualized violence in conflict originated by Gloria Steinem at the Women’s Media Center in New York.

Wolfe, who according to friends is queer, had been a freelance editor for the Times, responsible primarily for editing stories on the Times home page related to the COVID-19 pandemic, journalist Yashar Ali tweeted Thursday.

Wolfe had tweeted the “chills” comment along with a photo of Biden’s plane arriving at Joint Base Andrews in Maryland, just outside D.C. She had also criticized Donald Trump’s administration for “pettiness” in not providing a plane for the incoming president, but she deleted that tweet “when she learned Biden chose to take his own plane,” Ali wrote.

Criticism of the Times has been mounting over the past few days, with many saying on social media that the paper had given in to right-wing coercion. 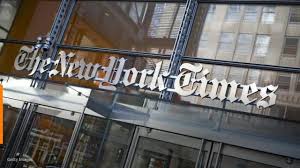 “The NYT was pressured by fascists, Trumpkins and hypocrites on the right for tweeting she had ‘chills’ after witnessing Biden’s landing on the 20th,” Josh Shahryar, a friend of Wolfe’s, wrote on Twitter Saturday. Shahryar, who has set up a Venmo account to support Wolfe, also tweeted that Wolfe is queer and Jewish, and had lost much of her family in the Holocaust.

Wolfe, who has now deleted her social media accounts, had tweeted earlier that she was being stalked and had received death threats as a result of her statement.

The Times responded Sunday. “There’s a lot of inaccurate information circulating on Twitter,” spokeswoman Danielle Rhoades Ha told The Washington Post. “For privacy reasons, we don’t get into the details of personnel matters, but we can say that we didn’t end someone’s employment over a single tweet. Out of respect for the individuals involved, we don’t plan to comment further.” Times officials did say that Wolfe did not have a contract “and instead worked on a more informal freelance basis,” the Post reports.