An unidentified woman who was “uninvolved and unassociated” with the thieves turned them in, LAPD said.

Lady Gaga’s two French bulldogs, stolen off the streets of Los Angeles Wednesday night, are homeward bound after being safely returned, according to NBC.

Multiple assailants stole the animals from Lady Gaga’s dog walker, Ryan Fischer, as he took them for a walk Wednesday evening in Hollywood. They pulled up beside Fischer in a white car, surrounded him, and shot him in the chest before making off with two of the dogs, Koji and Gustav. A third, Asia, escaped and later made it back to Fischer.

Fischer is in treatment and is expected to recover.

An unidentified woman reportedly turned the animals in to the Los Angeles Police Department’s Olympic Community Police Station around 6 p.m. Friday, Capt. Jonathan Tippett told the local station. Tippett said that the woman was “uninvolved and unassociated” with the dog thieves. How she came to possess them is unclear. No arrests have been made in the case.

The canines were unharmed, and the singer’s representatives confirmed they were the right animals. Lady Gaga, who is currently in Rome, had offered a $500,000 reward for the canines’ return, “no questions.” 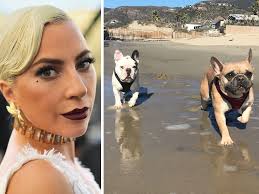