Buried in San Francisco Chronicle Megan Cassidy’s thorough report about the latest assault on an elderly Asian American is the following:

“(Daniel) Cauich has been arrested in recent months as well, most recently on May 18 for burglary allegations. Court records show prosecutors filed charges including first-degree burglary in this case, and requested that Cauich be held in jail while he awaited trial. A judge denied this motion and Cauich was released on June 7, court records show.”

Former acting District Attorney Suzy Loftus, who was defeated by incumbent DA Chesa Boudin in November 2019, willfully ignored the truth. She saw fit to break her political silence and launch an attack. 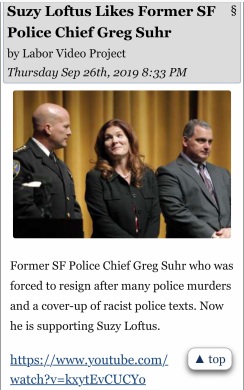 “This cannot become normal in our city. SF is meant to be a refuge & a safe place for all – but it has turned into a hotbed for Anti-Asian hate. This is not my city — I urge all of our leaders to demand accountability & challenge the excuses and blame coming from @chesaboudin “

This completely baseless and unfounded political assault by @suzyloftus on the DA is the latest indication there are powerful forces behind the Recall attempt trying to oust Chesa Boudin from office.

Suzy Loftus is a City Hall political creature. Prior to her appointment by Mayor London Breed as acting DA less than a month before the 2019 election she was a Police Commissioner and a staff attorney for the Sheriff’s Department.

Suzy Loftus is a protege of disgraced ex Chief of Police Greg Suhr, who was forced from office in disgrace by late Mayor Ed Lee following a number of police shootings of civilians. Suzy Loftus was a Police Commissioner at the time.

It is high time that the voters of San Francisco realize who is behind the attempted Recall of District Attorney Chesa Boudin.

It is a blatant City Hall power grab by the entrenched interests. Politicans, bureaucrats and the Police Officers Association who opposed Chesa Boudin’s candidacy and are resentful of his incumbency.

These same forces are doing everything within their power to take him down.

This cannot be allowed to happen.

Top photo – Chesa Boudin being sworn in by Mayor London Breed as his wife Dr.Valerie Block looks on – January 8, 2020