San Francisco has lost an original. I used to see Jack Hirschman frequently at Cafe Trieste where I spent time sipping a cappuccino while reading a book or writing in my journal. Jack  an integral piece of the North Beach ambience, was known by every local. His passing is a sad day for San Francisco. His memory will live on.

Jack Hirschman, a scholar and translator in nine languages who threw over a career as a college professor for the life of a proletarian North Beach poet, died Sunday at his home on Union Street in San Francisco.

A former San Francisco poet laureate, Hirschman enjoyed a publishing career that lasted more than 50 years and more than 100 volumes, though half of them were translations.

“The most important thing as a poet is that I worked for the Communist movement for 45 years, and the new class of impoverished and homeless people,” he said in a 2018 interview to inform this obituary, while laying on his double bed on the fourth floor of a walk-up, overlooking Columbus Avenue.

With his push-broom mustache, weathered face, wild hair and outlandish hat, Hirschman was what you looked for in a bohemian, and he lived the part in a single room in the old hotel above Caffe Trieste. Even after marriage upgraded him to a cottage behind an apartment house, Hirschman still came to write every day in his room.

Hirschman was 87 and had given a reading at Foreign Cinema on Wednesday before coming down with a cold, his wife, Agneta Falk, a poet and calligrapher, said Sunday. Cause of death is undetermined.

“It is devastating to the local community because Jack was a friend to everybody, ” said Beat Museum founder Jerry Cimino on Sunday. “Jack was too young to be considered a Beat but he knew them all, and his reach and influence went far beyond San Francisco and California. He was always approachable, and a word of recommendation from Jack could launch a poet’s career.”

Much of his work was put out by small publishers, often as small as Hirschman’s room, outfitted with a copy machine and stapler, and a print run of 150 copies. “One of my presses,” he said, “is this room you are sitting in.”

If he was not in that room, Hirschman was usually around the corner in Caffe Trieste, his face hidden beneath a floppy hat and behind a double espresso. It was here that he wrote his first San Francisco poem, in the early 1970s, not long after he’d been fired from the faculty of UCLA for antiwar activism.

He wrote a poem in Russian, then translated it to English, as follows. “You are not a slave/And I am not a machine/And this ain’t no opium den, comrade.”

On the success of that, he wrote a poem a day in Russian for 12 years, in addition to two poems in English as his daily output. The poems piled up. His best known work, “The Arcades,” was published in two volumes of 1,000 pages each. At the time of his death he was 450 pages into Volume 3. 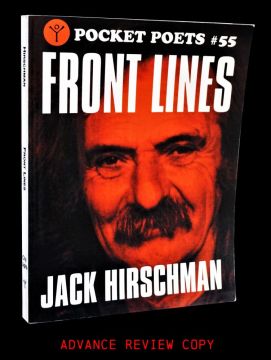