The media has been trashing 49ers QB for his poor performance in the 20-17 loss to the Tennessee Titans last Thursday.

It appears there is  definitely a legtimate reason that Jimmy G did not have a standout performance. The Niners QB suffered a serious thumb injury during the second quarter.

Garoppolo may be done for the season. This means the 49ers top draft choice Trey Lance, who has warmed the bench all season, will be thrown into the spotlight against the Houston Texans this Sunday and the season finale against the Los Angeles Rams on January 9.

Quarterback Jimmy Garoppolo suffered an injury to his right thumb in Thursday’s loss to the Titans that has clouded his status for the rest of the 49ers’ season.

Though the team characterized the injury as a sprain, ESPN reported Garoppolo suffered a torn ulnar collateral ligament (located in the lower thumb) and a fracture. Dr. Nirav Pandya, the associate professor of UCSF orthopedic surgery, said that surgery to repair such an injury involves a recovery timeline of four to six weeks. 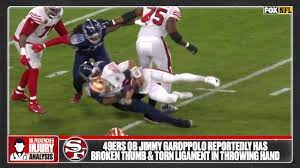 Pandya was skeptical Garoppolo could play effectively through the injury if a brace was used to support his thumb. The UCL is key for stability and grip strength.

Asked if Garoppolo’s season is likely over, barring an unforeseen development, Pandya paints a picture in which fans should expect Trey Lance will be the 49ers’ starting QB on Sunday and beyond.

“That would be my guess based on what’s being reported,” Pandya said. “I think it would be very hard for a quarterback to either play at all, or play effectively, with this injury. That would be my educated guess.”

Rookie Trey Lance, the third overall pick of the 2021 NFL draft, will make his second career start if Garoppolo is unable to play against Houston on Sunday at Levi’s Stadium. Lance hasn’t thrown a pass in a game since he started in a 17-10 loss at Arizona on Oct. 10, when Garoppolo was sidelined with a strained calf.

The 49ers (8-7), currently the No. 6 seed in the NFC playoff chase, could need to beat Houston and the Rams in their regular-season finale to secure a postseason berth.