Sidney Poitier’s passing last week continues to generate discussion about perhaps his finest cinematic role.  The homicide detective who by happenstance assists in the investigation of a murder in a small Mississippi town.

Amazingly, even though In the Heat of the Night received several Academy Awards including best pictre in 1968, Poitier wasn’t even nominated for Best Actor.

“Sidney Poitier by James Baldwin.” A cover story in the now-defunct Look magazine in June 1968 announcing itself with these five words.

Poitier was a year removed from a trifecta of major hits—To Sir with Love, In the Heat of the Night, and Guess Who’s Coming to Dinner—that affirmed his unprecedented stature as a Black movie star big enough to draw millions of dollars and viewers on his name alone.

At the same time, Poitier was also drawing increasing criticism that his movie image was too accommodating to whites to reflect the increasing militancy in the Black community—especially in the wake of Martin Luther King’s assassination three months earlier. I wanted to hear more from Poitier on this and other matters, and who better to get it out of him than the Black writer who was himself under increasing scrutiny from militant writers and yet remained an influential and respected voice and, as with Poitier, achieved a level of fame that transcended racial barriers?

But the article wasn’t an interview with Poitier so much as an essay about how well Baldwin knew Poitier and how he generally felt about Poitier’s work. 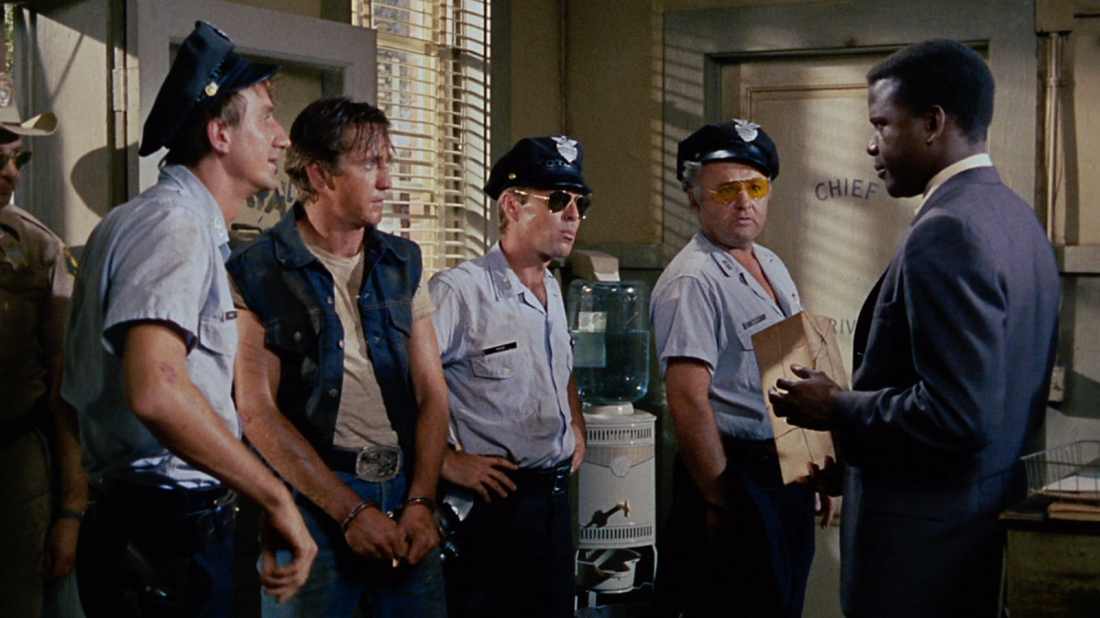 In the Heat of the Night, the 1967 murder mystery set in the Deep South that won Oscars for almost everybody involved except director Norman Jewison and Poitier—who wasn’t even nominated for what I still believe to be his finest purely cinematic performance, as Virgil Tibbs, the cool, circumspect Black police detective dragooned into helping the bullying, belligerent small-town police chief Bill Gillespie (Rod Steiger) solve the murder of a prominent Northern businessman.

When the movie came up for discussion in the wake of Poitier’s passing, most people remembered the galvanic moment when an imperious white plantation owner (Larry Gates) slaps Tibbs’s face for interrogating him, whereupon Tibbs slaps back with equal force, creating a moment of tension that froze everybody who witnessed it, on-screen and off.

Thirty years later, I’d seen the film at an film festival’s anniversary screening and found myself frozen in place by a moment I didn’t remember from the first time I’d seen the movie, but which created within me a similar frisson: It came when Poitier’s Tibbs has determined the identity of the murderer and, for the second time in the movie, is confronted by a surly mob of redneck thugs prepared to thrash the uppity Negro detective with chains and lead pipes. A shoot-out ensues between the murderer and one of the thugs; the latter falls dead after wounding the former. At which point, with police sirens wailing, Tibbs picks up one of the two pistols and points it at the remaining, perplexed pack of would-be attackers.

He had a gun? I said to myself. How did I miss that the first time? A Black man holding off a white mob with a pistol? That seemed almost as unprecedented and unexpected as Tibbs’s refusal to turn the other cheek. I was so uncertain of this that I called the archivist responsible for restoring the original print for its reshowing. He never called back, but a DVD released not long afterward confirmed what I’d seen, or, more to the point, missed the first time.

From then on, I saw both the movie, and Poitier, with even greater appreciation. What did it take, I wondered, for Poitier’s Tibbs to be allowed to do all the things in this movie that his white counterparts did as a matter of course? What alloy of patience and poise had Poitier managed to fashion over what was already a celebrated career to bring off moments like these that couldn’t have been imagined or allowed in a Hollywood movie not long before? And, once again: How did I not see it first time around?

When Poitier put those goons at bay in In the Heat of the Night, I now think, he was announcing that things weren’t going to be as they once were in the movies, for him, for me, for white people, for everyone. As much as you’d like to shake people’s lapels about how much things still need to change, Baldwin and Poitier remain in memory, and for all time, as reminders of how change has always been possible.