“No way to delay that trouble coming everyday,” to quote Frank Zappa in his 1966 LP “Freakout!”

A group of California junior high students were caught forming a swastika with their bodies on school grounds and exchanging racist and violent messages on a group chat, administrators said.

The scandal at Matilija junior high school, which culminated in an emotional meeting with parents and school officials Monday night, has sparked intense debate in a region that has experienced a sharp increase in reported antisemitic incidents.

The middle school in Ojai, a small city 80 miles north-west of Los Angeles, told parents in a letter in December that officials had discovered photos showing “nine students laying on the field together to form the shape of a swastika during lunch”. Administrators said the images appeared in a group chat that was active in November and December and featured “racist, sexually inappropriate and threatening commentary”, including one student’s call “to bring knives to school”. The photos and texts have not been released.

Cyndi Silverman, regional director of the Anti-Defamation League (ADL), who has been working with Ojai school officials, told the Guardian that there were 28 students on the group chat, which featured a wide range of hateful content: “There were a number of texts that were anti-LGBTQ, antisemitic, anti-black, anti-Latino.” 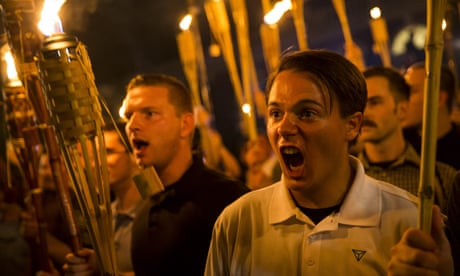 Antisemitic incidents in the US have recently surged to the highest level in two decades, according to the ADL, which documented 457 cases in K-12 schools in 2017, a 94% increase from the previous year.

The local ADL for Ventura, Santa Barbara and San Luis Obispo counties responded to five antisemitic incidents in 2016, followed by 19 in 2017 and 21 in the last year, Silverman said. Ventura County is a “hotbed for white supremacists and the ‘alt-right’ movement”, she added.

The Ojai controversy follows numerous reports across the country of increased school bullying echoing the hateful rhetoric of Donald Trump, and a rise in harassment, abuse and offensive language by students on Instagram, Facebook and other digital platforms.