First it was Oregon earlier this year with Statewide Rent Control. Now New York.  I thought California a True Blue State. If it is genuinely True Blue it would follow the lead of its neighbor to the North and sister state on the East Coast.

Newly empowered Democratic leaders in Albany announced a landmark agreement on Tuesday to strengthen New York’s rent laws and tenant protections, seeking to address concern about housing costs that is helping drive the debate over inequality across the nation.

The changes would abolish rules that let building owners deregulate apartments, close a series of loopholes that permit them to raise rents and allow some tenant protections to expand statewide.

The deal was a significant blow to the real estate industry, which contended that the measures would lead to the deterioration of the condition of New York City’s housing. The industry had long been one of the most powerful lobbies in Albany, but it suffered a loss of influence after its Republican allies surrendered control of the State Senate in the November elections. 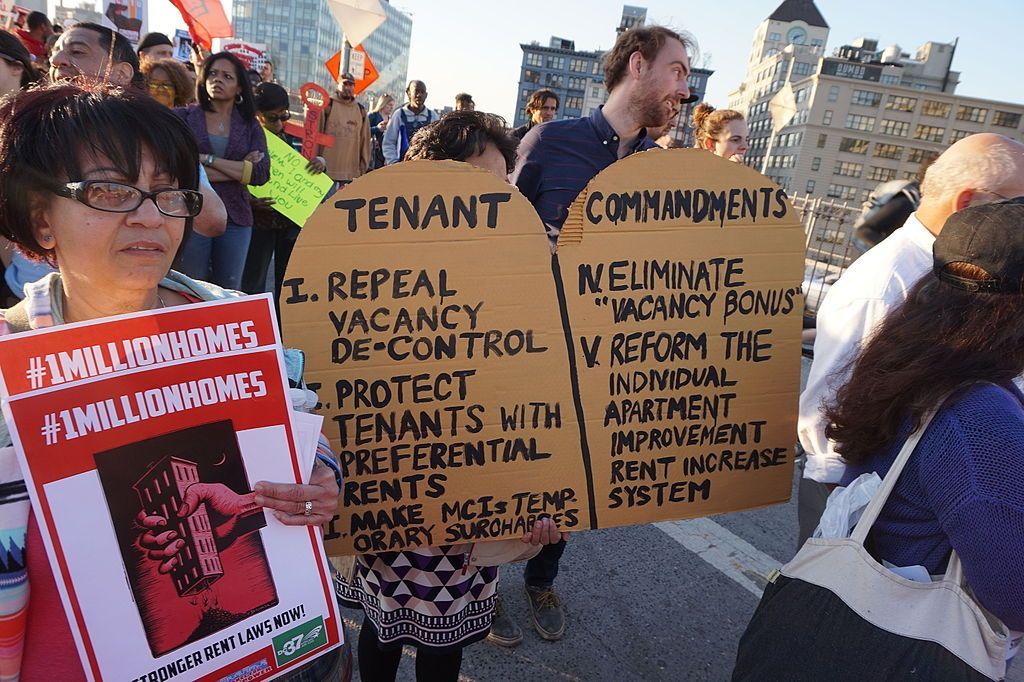 “These reforms give New Yorkers the strongest tenant protections in history,” the Senate majority leader, Andrea Stewart-Cousins, and the Assembly speaker, Carl E. Heastie, said in a joint statement. “For too long, power has been tilted in favor of landlords and these measures finally restore equity and extend protections to tenants across the state.”

The current rent regulations expire on Saturday. The new and strengthened rules would mark a turning point for the 2.4 million people who live in nearly one million rent-regulated apartments in New York City after a decades-long erosion of protections and the loss of tens of thousands of regulated apartments.

The legislation in Albany is far-reaching: While rent regulations are currently restricted largely to New York City and a few other localities, the new package would allow cities and towns statewide to fashion their own regulations, which are meant to keep apartments affordable by limiting rent increases.

It would also make the changes permanent — a major victory for tenant activists who have had to lobby Albany every few years when the old laws expired.

Gov. Andrew M. Cuomo, a Democrat, said he would sign whatever package of rent bills the Legislature passed.

The imminent changes come as New York and other major cities are grappling with a shortage of affordable housing, prompting even Democratic presidential hopefuls to increasingly court renters as a new voting bloc.