The Supreme Court made a correct and logical ruling in striking down racial bias in Jury selection.  Regrettably and predictably, Clarence Thomas weighed in with  a misguided and extreme Opinion which would have allowed this type of prosecutorial behavior to continue unabated.

WASHINGTON—The Supreme Court on Friday reaffirmed its strict prohibition against racial bias in jury selection, voting 7-2 to overturn a black defendant’s murder conviction by a Mississippi court after a prosecutor dismissed 41 of 43 African Americans over the course of six trials for the same killings.

Writing for the court, Justice Brett Kavanaugh said it was unnecessary to break new legal ground. But the “extraordinary facts of this case” required the court’s intervention.

Justice Thomas, in dissent, accused the majority of pandering to news media interest in the Flowers case and acting on its own bias against state courts in the South. Justice Thomas contended there were race-neutral reasons for striking nearly every black juror and that the conviction should stand.

But he went further still, in a section Justice Gorsuch didn’t join, arguing that the Batson precedent was a mistake. “The ‘entire line of cases following Batson’ is ‘a misguided effort to remedy a general societal wrong by using the Constitution to regulate the traditionally discretionary exercise of peremptory challenges,’” he said, quoting one of own prior opinions. 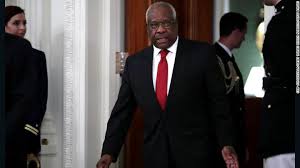 Most trial courts allow lawyers to exercise a number of peremptory challenges during jury selection—that is, dismissing potential jurors without providing a reason. But in a 1986 case, Batson v. Kentucky, the Supreme Court held it was unconstitutional to do so based on race.

The Supreme Court has expanded the Batson principle since 1986 and now forbids sex-based use of peremptory challenges. But in his Batson concurring opinion, Justice Thurgood Marshall, the court’s first black member, said peremptory challenges should be banned altogether.

Starting in 1997, Doug Evans, the district attorney in Winona, Miss., prosecuted Curtis Flowers six times for the same crime. Two trials ended with hung juries, while three convictions with death sentences were overturned by the Mississippi Supreme Court for prosecutorial misconduct or racial bias in jury selection. The fourth conviction and death sentence—in 2010, by a jury with 11 whites and one black—was upheld by the state courts.

He added, “Enforcing that constitutional principle, Batson ended the widespread practice in which prosecutors could (and often would) routinely strike all black prospective jurors in cases involving black defendants.”

“In the decades since Batson, this Court’s cases have vigorously enforced and reinforced the decision, and guarded against any backsliding,” Justice Kavanaugh also wrote. He was joined in the majority opinion by Chief Justice John Roberts and Justices Ruth Bader Ginsburg, Stephen Breyer, Samuel Alito, Sonia Sotomayor and Elena Kagan.

Mr. Flowers was convicted of the 1996 killings at the Tardy Furniture Store in Winona. The victims included the owner, Bertha Tardy, 59 years old, and three employees, Carmen Rigby, 45; Robert Golden, 42; and Derrick Stewart, 16.

Mr. Flowers, then 26, had worked at the store, but no physical evidence tied him to the crime scene. Prosecutors argued he killed the victims in revenge for being fired.

Winona already merited a footnote in civil rights history. In 1963, civil-rights activist Fannie Lou Hamer was arrested while her intercity bus made a rest stop. At the 1964 Democratic National Convention, she recounted being beaten and taken to jail. “We are going to make you wish you was dead,” she said an officer told her.

It was clear during the oral arguments in March that most justices found the case troubling. Justice Elena Kagan observed that Mr. Evans examined black jurors more aggressively than whites, with more questions and to different ends.

“This prosecutor would question a white person who said that he or she had reservations about the death penalty,” she said, with the questions designed to elicit a promise to follow the law regardless.

“But if an African American said that he or she had qualms about the death penalty, the prosecutor would say the exact opposite,” Justice Kagan said, “like, ‘Well, it would be really hard for you to apply the death penalty then, wouldn’t it?’”

“The district attorney offered valid race-neutral reasons for each strike,” said Jason Davis, who represented the state of Mississippi.

“Any prosecutor can easily assert facially neutral reasons for striking a juror, and trial courts are ill-equipped to second-guess those reasons,” he wrote in 1986, adding that some racial bias could even be subconscious. The only complete solution, he said, was “banning peremptories entirely.”

Write to Jess Bravin at jess.bravin@wsj.com