She makes America proud. Superstar fearless Megan Rapinoe speaks truth to bullying, whether on the soccer Pitch or to the current White House occupant.. Ms. Rapinoe is amped up for Team USA and its Friday match with the French team in Paris.

Megan Rapinoe has urged her USA teammates to “think hard” about associating themselves with Donald Trump. The 33-year-old found herself embroiled in a row with Trump after footage shot earlier this year emerged showing her saying: “I’m not going to the fucking White House,” when she was asked whether she would visit should her team win the World Cup.

Rapinoe, who is gay, has previously attacked Trump, claiming he is sexist and misogynistic, and described herself as “a walking protest”. She became one of the first athletes to join the then NFL player Colin Kaepernick’s protest against alleged police brutality by kneeling during the American national anthem.

After team regulations were changed Rapinoe now protests by refusing to sing the national anthem but her White House comments thrust her into the spotlight of the president, who accused her on Twitter of disrespect. 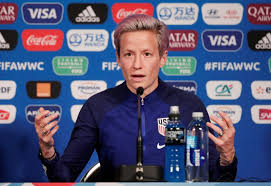 It was an unwanted distraction before the USA’s quarter-final against France in Paris on Friday but Rapinoe refused to back down. “I stand by the comments that I made about not wanting to go to the White House with exception of the expletive,” she said. “My mom will be very upset about that.

“Considering how much time and effort and pride we take in the platform we have, using it for good and leaving the game in a better place and hopefully the world in a better place, I don’t think I would want to go.

“I would encourage my teammates to think hard about lending that platform or having that co-opted by an administration that doesn’t feel the same way and doesn’t fight for the same things we fight for.”