The Women’s World Cup Final this Sunday between Holland and America is getting the well deserved Buzz.

It’s Outrageous  that the Men’s World Cup 2022 was awarded to Qatar. The foul atmosphere surrounding the selection of Qatar shows no sign of going away.  The world’s top sporting event must be moved to a more suitable venue when the corruption and payoffs finally see the light of day.

Sepp Blatter, the disgraced former head of Fifa, said he is willing to speak to French anti-corruption investigators investigating the award of the 2022 World Cup to Qatar. 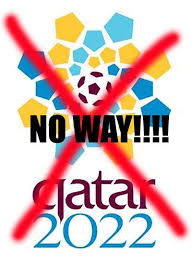 Mr Blatter, 83, said he was “at the disposal” of officials to discuss the frantic horse-trading in the days before the award of the world’s largest single sport event to a state with no history of hosting major tournaments.

Mr Blatter, who was head of the world’s global football body for 18 years, is currently suspended from football for six years over a secret £1.3 million payment to former Uefa boss Michel Platini, just months after the award of the tournament.

Mr Platini was questioned last month by French investigators over matters including the award of the 2022 tournament.

Investigators were seeking to check if Mr Platini received bribes in exchange for his support for Qatar, according to French media reports. He has denied any wrongdoing.

Mr Blatter has previously spoken to French officials in 2017 in Switzerland as a potential witness but told the BBC that he was ready to be questioned further following the grilling of Mr Platini.

“I am prepared to help to clarify all these situations,” he told the British broadcaster. “I heard that they would like to speak with me.”

Mr Platini was seen as a likely replacement for Mr Blatter when he eventually stepped down as the most powerful figure in global football.

The succession planning was thrown awry by the corruption scandal that engulfed the sport following the award of the tournament to Doha. The were both toppled from their positions in 2015.

Mr Blatter had favoured a US bid but Mr Platini switched sides to back the Middle Eastern bid following a private dinner at the Elysee Palace, hosted by French president Nicolas Sarkozy, and included officials from Qatar including then crown prince Sheikh Tamim Bin Hamad al Thani.

Mr Blatter has claimed that Mr Platini’s switch was key to deciding the outcome of the vote, which came just nine days after the dinner.

He claimed that Mr Platini told him that he was switching because of potential trade deals between France and Qatar. Mr Platini has denied the claim and said that he voted in the interests of football development.

“Sarkozy never asked me to vote for Qatar, but I knew what would be good,” he told the Associated Press in 2015.

Mr Blatter told the FT in 2015 that there had been a “gentleman’s agreement” among Fifa’s top brass to back the US bid within 22-strong executive committee who decided the venue before a secret ballot.

He blamed the “governmental interference of Mr Sarkozy” for the change.