The Warriors superstar just got burned. Obviously Draymond Green failed to take a course in Middle East Politics prior to his trip to Israel.

Reem Assil, who has been praised by publications like The Chronicle and Food and Wine, has played a vital role in sparking Oakland’s Fruitvale neighborhood as a food destination. One of her signatures at her Arab bakery, Reem’s California, has been the “Draymond Green,” a seasonal vegetable wrap.

Assil, a lifelong community activist, has also been outspoken concerning social and political issues both inside and outside of the restaurant world. When her bakery opened in Fruitvale in 2018, it drew the ire of members of the Bay Area’s Jewish community, due to a mural of Rasmea Odeh, a Palestinian woman convicted of terrorism in Israel.

“I’m a small business and it’s not easy taking these kinds of stances,” Assil said. “But I think it’s important we do the right things with our platforms.”

The chef’s decision to stop selling the dish is linked to Green’s 2018 visit to Israel. While there, Green posed for a photo holding a military rifle as though he were a sniper, during a stop at the base of an Israeli Defense Force counter-terrorism unit, the Yamam. 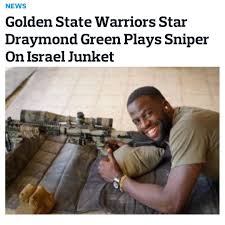 The 2018 photo, as well as an accompanying video of Green taking target practice, exploded across the internet and proved to be fodder for political debates around Palestine and Israel relations, as well as the power of an athlete’s platform when it comes to political commentary.

“Draymond should have done more homework on where he was going,” Assil told The Chronicle on Thursday, the same day she announced via her website she would be pulling the wrap from her menu. “I think it’s important to let him know how those images impact Palestinians, people that are fans of his that want him to understand where these feelings are coming from.”