Right here in Deep Blue California.  This is disturbing. Ignoring the reality of a strong and growing Nazi sentiment in America is a recipe for Disaster.

High school students in southern California appeared to give the Nazi salute in disturbing video footage taken at a sports team awards ceremony.

Among outraged reaction on social media, the musician and activist Bill Madden blamed the president, writing on Twitter: “This is America. Trump has made the Third Reich family friendly.”

A video purportedly shows around 10 members of the boys’ water polo team at Pacifica high school in Garden Grove giving the salute while facing a figure at a lectern who is saluting and singing.

According to the Daily Beast, which published the video, the incident occurred before an awards ceremony late last year. The website reported that the song is an obscure Nazi marching song from the second world war.

The video was reportedly shared on Instagram by a student, who allegedly also posted lyrics to the song in his bio on the social network which he later removed.

It is the second incident involving Nazi depictions and high school students in the region to come to national attention this year. In March, pupils from nearby Orange county appeared to do the Nazi salute while surrounding cups arranged in the shape of a swastika. 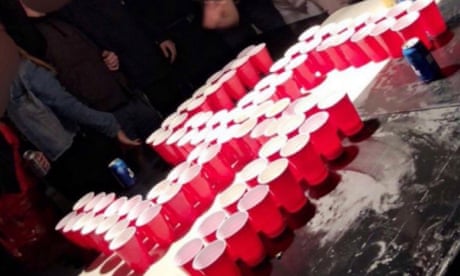 The Garden Grove Unified School district, which oversees Pacifica high school, said both organizations “strongly condemn” the video, which it said was “recorded last year of some students who engaged in offensive Nazi-related gestures”.

A district spokesperson told the Guardian that the incident took place before an “after school hours, off-campus” student athletics banquet and shared with “a small group of students” on Snapchat.

“It was not brought to the attention of the administration of Pacifica high school until March of 2019, four months following the banquet, at which time school administrators took immediate action and addressed the situation with all students and families involved,” she added.

The district declined to comment on whether any disciplinary measures were taken, citing the Federal Educational Rights and Privacy Act. But the spokesperson said following the incident, the school has “reached out to community organisations to provide support that will continue to ensure an anti-bias learning environment and address issues of hate, bias, and exclusion with all staff and students”.

She added: “Pacifica high school, along with our other district schools, will be working with students, staff, and parents to continue to address these issues in the fall in collaboration with agencies dedicated to anti-bias education.”