The rapid rise of the AfD in Germany is not getting the attention it deserves in America. This Neo Nazi party, disguising itself as a legitimate mainstream political party, is rapidly pushing its way forward and becoming major presence in Germany, Europe and beyond.

The far-right Alternative for Germany continues to make gains after strong showings in two eastern state elections in Brandenburg and Saxony. What lies behind the party’s success in the former East?

There is no simple way to explain the motivations of Alternative for Germany (AfD) party voters. They are far too many, and they are varied. There are, however, some conspicuous traits: Most them are between the ages of 30 and 60, and they are predominantly male. 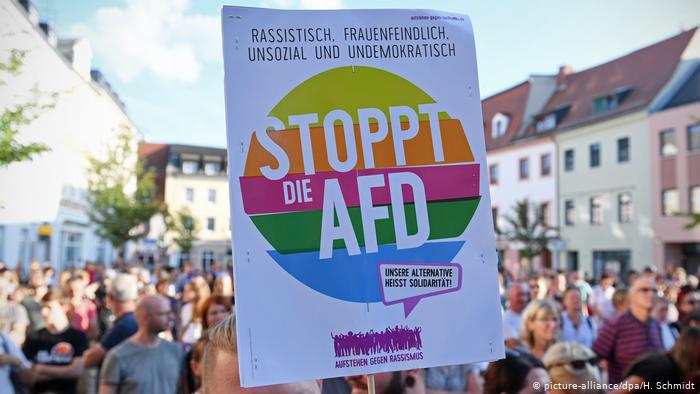 Lusatia, a region in eastern Saxony and southern Brandenburg, is an AfD stronghold. The far-right party picked up 30% of the vote there in Sunday’s state elections. Lusatia suffered in the economic downturn that followed German reunification in 1990. Coal mining — practically the only major industry left in the region — has been especially hard hit. Polls show that in areas like Lusatia that struggle economically, voters often choose the AfD.

The migration of wolves from Eastern Europe to eastern Germany and the construction of wind turbines are two issues that have upset voters in the region: many locals now have a towering generator close to their property. The wolf issue has enraged people, especially farmers. In an attempt to save their stocks, they were forced to fence in goats and sheep, but often wolves have still managed to kill the animals. There are now so-called wolf guards in some towns to watch over herds. When these things happened, the AfD was there: often present at pre-election events, the party was listening to the people and promised to help.

For years, state governments in Saxony and Brandenburg laid out plans to boost regional investment, some of which were much more successful than others. Those policy failings can can be felt in the region’s numerous struggling communites. On the Polish border (another AfD stronghold), for example, there are near-empty towns with dilapidated streets and old lights, no shops, and hardly any children.

Many people feel abandoned by the federal government in Berlin. They had few chances for prosperity and remained disadvantaged in postunification Germany. Saxony’s government has boasted about the state’s prosperity⁠ but in many towns, there is little evidence of it.

When refugees began to arrive in Germany, an event that drew national attention, many people in this part of the country found it difficult to grasp. They felt they had been there long before the refugees arrived, but nobody ever cared about them. That kind of sentiment was common at the peak of the refugee crisis in 2015 and 2016. Talking to people living there today, little has changed.

The AfD wants to use this regional election success to make gains nationally: The East can be a tailwind for voters in the West, as many party leaders have long said. But this momentum will also stoke internal party tensions: the bolstered factions from the eastern states will increasingly stake a claim on the national level.

An East-West internal party conflict appears to be looming already

Read more: Culture under scrutiny — what AfD gains at the polls imply for the arts