The SFPD shooting of Jamaica Hampton is a sad but all too common episode.  The fact SFPD fired eight shots and him Hampton three times has all but disapeered from the mainstream San Francisco Media.

As of Wednesday Hampton was still hopitalized in critical condition.

It is the community news outlets which are keeping this latest tale of SFPD behavior alive.

A San Francisco town hall meeting regarding last weekend’s Mission District shooting by SFPD  will be held at 6 p.m. on Tuesday, Dec. 17, at Cesar Chavez Elementary School, at 825 Shotwell St., between 21st and 22nd.

Video of Saturday morning’s police shooting of Jamaica Hampton reviewed extensively by Mission Local reveals the 24-year-old was not shot while purportedly assaulting an officer — but rather, while attempting to escape a pair of them. Hampton was shot, at least once, while running from one officer and in the direction of another, following an extended foot chase.

He was hit in what appeared to be his front left midsection or upper leg about a minute into the video clip, and collapsed into the middle of 23rd Street. A clutch of San Francisco Police Department officers subsequently stripped his clothing and applied resuscitation efforts as blood pooled on the double yellow lines.

While Mission Local was able to review the footage thoroughly, we were unable to obtain permission to publish it online.

In the video, Hampton appeared to be holding an object in his hand — potentially the bottle with which he allegedly struck an officer moments before. That alleged attack is not caught on the footage observed by Mission Local.

Rather, it begins with a pair of officers running, guns drawn, eastbound on 23rd Street, attempting to contain the fleeing Hampton. He bobs and weaves between parked cars and runs about the sidewalks and the streets in an effort to elude the officers — who have their guns drawn throughout. At several points, Hampton ceases running, and both officers take aim at him and have a clear line of fire. Since there is no sound in the video, it is unclear what directions the officers were giving to Hampton. But, rather than surrender, he would then break off running again.

In the pivotal sequence, he sprints off the sidewalk on the south side of 23rd, past an SUV, and past one officer. He then heads onto the opposite sidewalk on the north of the street and begins running west, toward Mission Street — before abruptly cutting between two parked cars and darting into the street.

At this point he is running in the direction of the second officer, who was standing in the middle of 23rd Street — though, it appears, not directly at him. That officer fires at least once at Hampton, from a range of perhaps six to eight feet and what looks to be a 45-degree angle from the running suspect.

Hampton doubles over and hits the ground. He appears to attempt to get up, but he cannot.

Eyewitness accounts following the 8:33 a.m. Saturday incident reported an officer with a bloody face and what appeared to be a broken nose, and the SFPD confirmed an officer was hospitalized along with Hampton. 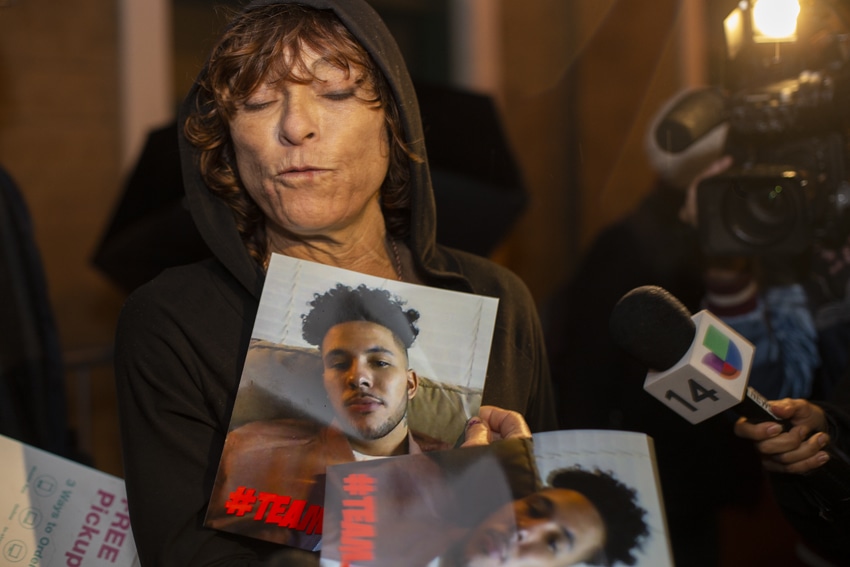 At a Tuesday night demonstration in front of Mission Police Station, Mission District activists were surprised when Hampton’s mother, Tana, unexpectedly showed up and asked organizers to address the crowd. Tana Hampton, who had made the trip to the city from Sacramento, identified the shooting victim as her son. The SFPD confirmed on Wednesday in a press release that Jamaica Hampton was the man involved in the Saturday incident. He was approached by police responding to a suspected burglary and then allegedly assaulted an officer before “an officer-involved shooting occurred,” according to the press release.

Hampton had struggled with substance abuse. Family spokeswoman Dyne Biancardi said he’d relocated to the city from Sacramento for a treatment program. Jamaica Hampton had been homeless “for a while,” according to Biancardi.

Biancardi lives a few blocks away from where the shooting occurred. She told reporters she was initially contacted by Jamaica Hampton’s brother. She then waited outside of Jamaica Hampton’s hospital room for five hours, she said. Biancardi, who is also a lawyer, said the Jamaica Hampton had been shot in the leg and that it was unlikely he would be able to walk the same way again.

Hampton’s sister, Brittany, told Mission Local that the family’s attempts to visit Hampton in the hospital were barred by sheriff’s deputies, who said they were acting on the orders of the District Attorney. Our calls to the DA have not been returned.

The Hampton family hopes to visit Jamaica Hampton this afternoon.

Above: Jamaica Hampton’s interview with CityTeam, a nonprofit. The video was published on Oct. 29, 2019 via Youtube.

Brittany Hampton told Mission Local that the SFPD contacted her and said no charges would be filed against her brother. SFPD spokesman Sgt. Michael Andraychak, however, denied that any charges had been dropped. “The press release is accurate,” he said.