DA Chesa Boudin has been in office barely 24 hours and the vultures are already circling. Federal charges for a local incident with “gang enhancements” are being moved to US District Court.

The charges stem from a shoot out in San Francisco’s Western Addition in March 2019.

The previous DA declined to pursue “gang enhancements” against the accused.

The Feds conveniently ignore the fact DA Boudin had no involvement in this case.

Nonetheless, the Feds and SFPD are already casting their indictment in terms of holding Chesa Boudin accountable for the move to Federal Court.

DA Boudin has vowed to end the gang enhancement charging policy.  He calls it racist and unnecessary.

This is the kind of pressure DA Boudin can expect for the next four years.

Federal authorities in San Francisco announced charges Thursday against two alleged gang members in a March shootout at the city’s Fillmore Heritage Center that left one man dead and five others injured — including a bystander who was shot in the spine and paralyzed from the waist down.

Officials from the U.S. attorney’s office, FBI and San Francisco Police Department underscored their collaborative partnership in announcing the charges against Robert Manning, 28, and Jamare Coats, 26, who were indicted by a federal grand jury on counts of using a firearm in a violent crime resulting in death and being felons in possession of a firearm.

Thursday’s indictment by the feds comes after local prosecutors filed less serious weapons charges against Coats and another defendant shortly after the incident.

Coats and Manning, authorities said, are members of the notorious Mac Block street gang and sprayed bullets at an armed rival on a crowded sidewalk outside the cultural center at 1330 Fillmore St. during a funeral for a self-proclaimed “drug kingpin.” 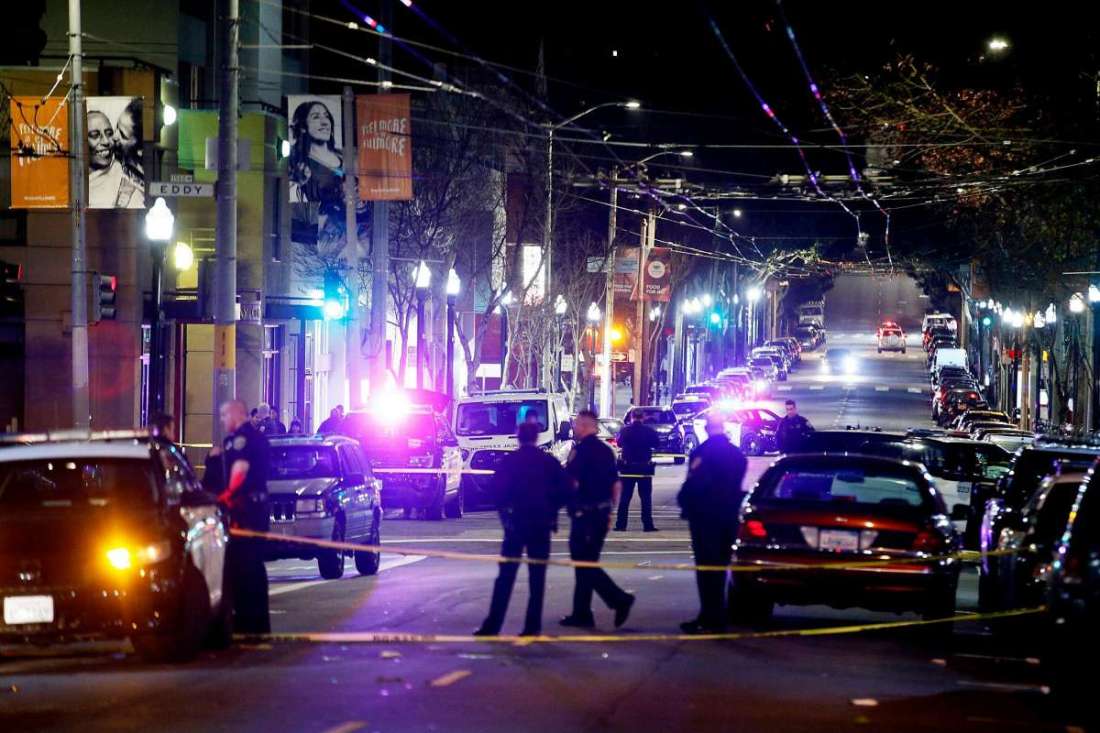 “An event like this is completely unacceptable,” said Jack Bennett, special agent in charge of the FBI’s San Francisco field office. “The streets of San Francisco cannot and will not be used as a playground for gang warfare. We won’t allow it, and we will pursue those who try. Those wannabe kings of the street don’t have a throne waiting for them. They will have a federal prison cell waiting for them.”

Attorneys for the defendants did not immediately return calls seeking comment.

The March 23 shooting stunned the Fillmore neighborhood and stalled the revival of its newly reopened heritage center — an African American cultural center that was built in 2007 to bring jazz and blues back to the district.

The shooting prompted concerns that the nonprofits that had recently been operating the center did not have adequate resources, including security, to run the facility. Supervisor Dean Preston, whose district includes the Fillmore, said he is scheduling community meetings to create a plan to re-open the center.

Thursday’s charges came one day after San Francisco’s newly elected district attorney, Chesa Boudin, was sworn in to office. Boudin campaigned on a platform of ending the use of gang enhancements, which he has called “racist.” Statistics show people of color are disproportionately charged with gang enhancements.

Gang enhancements add years to a felony charge, and defendants must be found guilty of participating in a “criminal street gang” while knowing its members have committed “a pattern of criminal gang activity.”

“As long as they’re about their work, we’ll be about our work as well,” he said.

“We’re going to keep doing what we do,” Scott said. “Laws change. People change. But our job remains the same — to protect the city. And it would not be wise to back off on how we do business because of a decision by the current district attorney.”

The bloodbath happened on a busy Saturday night around 8:30 p.m. Mourners packed the heritage center for the funeral of Ron Newt, a self-styled “gangsta pimp” and flashy San Francisco businessman, who died at age 69.

Inside the building, 25-year-old San Leandro resident Mister Dee Carnell Simmons III flashed a pistol to Coats and others, who ran outside to their vehicles to retrieve handguns, prosecutors with the San Francisco district attorney’s office wrote in court documents.

Two minutes later, Coats and two others ran back to the heritage center to confront Simmons, who had come outside, prosecutors said.

A witness told police that Simmons whipped out his handgun first and bullets started to fly, according to court papers.

Simmons shot at the group as Coats and others returned fire, prosecutors said. In the end, Simmons lay dead on the pavement while five bystanders were wounded, including a 27-year-old man who was shot in the spine and paralyzed from the waist down, police said.

Prosecutors filed gun charges against Coats and Sean Harrison, 25, but did not file murder charges. California law requires prosecutors to prove beyond a reasonable doubt that a defendant did not act in self defense in a murder case.

“The charges were brought based on the evidence,” said Alex Bastian, a spokesman for the San Francisco district attorney’s office. “We asked to detain both individuals without bail, and the judge agreed. Since then, the federal government has filed charges, and the case is now with them.”

Chief Scott said the Police Department is “very fortunate” to have the partnerships with federal authorities to “hold these individuals accountable.”

Coats has a criminal history that includes two state prison stints for illegal gun charges. Federal authorities filed gun charges against him in July while he was in custody and unsealed a superseding indictment against him and Manning on Thursday.