The January 10, 1982 playoff game referenced here was arguably the best 49ers game in the team’s history.

I was there, sitting in Section 28 in the upper deck with a fantastic view of The Catch by Dwight Clark which propelled the Niners to their first ever Super Bowl.

I was hoarse from yelling for the next two days.

A modern reading of classified ads for 1982 NFC Championship game tickets between the 49ers and Dallas Cowboys proves that every one of the sellers was a loser.

Assuming they weren’t unloading surplus seats, or putting the money directly into 1982 Apple stock, there is no way even a couple hundred dollars per ticket was worth missing out on the 49ers’ 28-27 win in “The Catch” game, arguably the single greatest sporting event in Bay Area history.

But the most striking takeaway, when looking at the old classifieds, is the incredible hassle of ticket transactions in 1982. Say what you want about the effect of screen time on our social skills. At least no one has to make a long-distance call to Larry in Napa to find out what “or best offer” means.

With Saturday’s, Jan. 11, divisional playoff game between the 49ers and Minnesota Vikings, we searched the Chronicle archive to find out how people sold 49ers playoff tickets in the 1980s, before StubHub, the internet and smartphones. The only possible way to explain this to someone under 30 years old is with the classified ads themselves …

This was always the first step in securing a ticket transfer in 1982: You picked up your landline, dialed seven numbers on your rotary phone (Oakland and Palo Alto were still in the 415 area code!) and asked for Bud.

Looking in three days of San Francisco Chronicle classifieds before the NFC playoff game, $325 was the most expensive ticket. These prices were considered to be insane; the team was just two years past a 2-14 season, when it was difficult to even give away 49ers tickets.

The least-expensive seats we found in the classified ads cost $35, but let’s put an asterisk next to that. Bay Area crime rates were high in 1982, so the reasonable classifieds assumption was that any ticket priced below $75 was being sold by someone who wanted to participate in a kidnapping or robbery.

A collect call, kids, was a move made with the help of an operator — think Siri, but a real person — who would facilitate a deal to reverse long-distance charges so they were paid by the recipient of the call. (What are long-distance charges? Additional telephone fees, established to ensure that if your girlfriend went to a different college, you would quickly have to break up.)

It’s the 1982 ticket sale version of a home buyer making an offer with no contingencies. An act of good faith, from someone who wanted everybody else to do the work.

Not a lot to say about this, except dedicated Chronicle classified readers of years past know that while bartering was still common in the classified ads in 1982, it’s very doubtful this seller ever got his sports car or pickup truck. The classified kept running until the day of the game.

This is the hero of our story.

Not only are the tickets being offered at below-gouging prices, but the seller makes it clear they’re refusing to hand the tickets over to Dallas Cowboys fans. #Salute

Did you know you have 10% off at San Francisco Wine School?

Not sure how the seller enforced this. I’m hoping that Mr. 584-6248 or Ms. 587-4085 gave each potential buyer a quiz, confirming that the caller knew that Fred Quillan was the starting center for the 49ers, and Dwight Hicks was the team’s interception leader with nine.

The 50-yard-line seats were the most expensive for the 1982 49ers/Cowboys game, but everyone in 2019 knows these were the ones to buy. You’re not paying for the ticket, you’re paying for the memory. And whoever bought these tickets for $166 each was probably about 10 yards away from Dwight Clark’s franchise-changing “The Catch.” (Or 130 yards away, depending on the end zone.)

Tickets at Levi’s Stadium for this weekend’s NFC Division playoff game against the Minnesota Vikings are going for between $222 and $23,500 on the secondary market. After looking at the classified marketplace in 1982, that seems like a pretty fair deal. 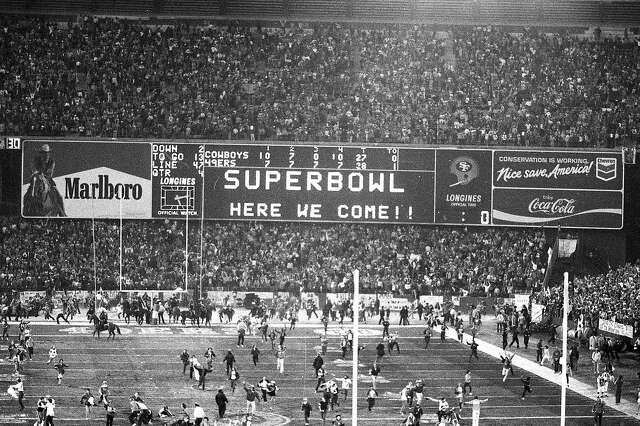 Jan. 10, 1982: The scoreboard after the San Francisco 49ers victory over the Dallas Cowboys at Candlestick Park.
Photo: Mike Maloney / The Chronicle 1982
https://www.sfchronicle.com/oursf/article/Ask-for-Bud-What-the-49ers-ticket-market-14961094.php