The following piece by Tim Redmond lays out in grim detail the strategy being employed by the corporate daily news organ.

To wit: Undermine DA Boudin on a daily basis.

Chronicle Beat reporter Evan Sernoffsky is a good writer, smart, diligent and hard working.  But, there is only so much Evan can do in spinning the story which ultimately appears in the paper.

A former POA consultant is the only source for a ridiculous headline and a story that makes an ordinary political transition look like a scandal. Why?

To read the San Francisco Chronicle headlines, a rather routine decision by the new district attorney to bring his own staff to leadership positions was a massive scandal, something on the order of Watergate:

The story refers to a “controversial purge,” which in fact amounted to a perfectly predictable series of modest personnel moves. Boudin, who was elected on a promise of profoundly changing the criminal justice system in San Francisco, replaced exactly seven members of a staff of close to 200.

He wants his own leadership team. That’s entirely normal for a new elected official who ran on a platform of change. He personally met with each of the seven. They are at-will employees who can be replaced at any time by the elected DA.

Every one of them will have a new job within a week, if they are in the market.

There really is no “controversial purge” here. In fact, hardly anyone in local politics thinks there’s a bit of “controversy” involved, much less a scandalous “massacre.”

KQED had a bit more perspective:

It’s not unusual for a newly elected district attorney to restructure the management team, said Lara Bazelon, a law professor at the University of San Francisco. The attorneys are at-will employees, which means they can be fired without reason.

Bazelon was a member of Boudin’s policy team during his campaign.

“It’s common to fire people who are in management at the top level who are not going to be enthusiastic about the new agenda,” Bazelon explained.

Bazelon gave the example of Philadelphia District Attorney Larry Krasner, another progressive prosecutor who campaigned on criminal justice reform. Krasner fired 31 members of his staff in 2018, three days after he was sworn in.

So where did the term “Friday Night Massacre” and the idea of “controversy” come from? Exactly one source: Nathan Ballard, who was described as a consultant to the Municipal Attorneys Association.

Nathan Ballard, a political strategist hired by the San Francisco Municipal Attorneys Association, said Boudin’s decision to fire the veteran attorneys was “unfair and it should be reversed.”

“This ‘Friday Night Massacre’ occurred after Boudin had given his word to his staff that there would be no group terminations, even going so far as to specifically name one of the employees who was eventually fired,” Ballard said in a statement. “Regrettably, Boudin’s first act in office was to break that promise.”

Boudin did not promise that there would be no terminations. I saw him meet the press the day of his inauguration, and he said, very clearly, that there were likely to be some personnel changes.

But the Chron editors took Ballard’s claim as a fact, and used his term in a headline.

How much credibility does this single source have? Let’s take a look.

Nathan Ballard is a former consultant for the San Francisco Police Officers Association who was hired to counter efforts at police reform. The head of the Municipal Attorneys Association is Sean Connolly, who is a former lawyer for the POA.

And it turns out that the attorneys union – which represents lawyers in the Public Defender’s Office and the City Attorney’s Office as well as the DA’s Office – isn’t entirely happy with Ballard’s attack on Boudin.

After the original Chron story, the union released a statement saying that Ballard didn’t at that point speak for it, and reporter Evan Sernoffsky updated his story:

Some members of the leadership in the attorneys union on Monday questioned Ballard’s hiring and told him to stop sending statements regarding Boudin until the executive board can discuss the issue.

He also put out on Twitter the statement from the Municipal Attorneys Association, which demanded that Ballard stop saying he represents that group. 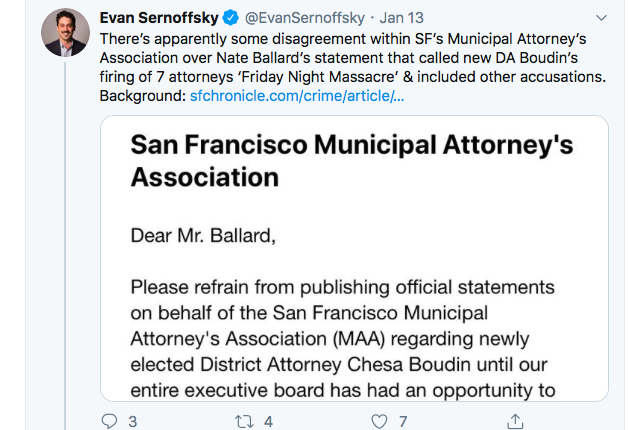 So: A former POA consultant who may or may not have the right to speak for a union, working for a former POA lawyer, is the only source the Chron can find to attack the new DA for doing what any reform-oriented elected official would do.

The reality is that after any change election resulting in significant new directions for a top prosecutor’s office — at the federal, state or local level — the new office holder will always bring in their own team to better implement and reflect the new priorities and programs. ALWAYS. That means some of the old guard will be let go to make room for the new team.

So why are members of SF’s law enforcement establishment — the old guard — squealing so loudly (if anonymously) in outrage when newly-installed DA Chesa Boudin predictably does the exact same thing? Because they want to undercut his agenda. Because he represents the most serious local challenge to their vision of how to best achieve greater public safety in their professional lifetimes.

Crew remembers when the POA brought in Ballard:

With much fanfare, the SFPOA hired Nathan Ballard to launch what was widely called a “counterattack” on the drives for reform and on what the Chronicle described then as “other perceived enemies of the (police) union.”

These are the people and organizations who will seemingly stop at NOTHING to prevent San Franciscans from getting the type and degree of criminal justice reform we voted for when we elected Boudin DA. They have their motivations. And, they DEFINITELY have their long track records which, by all rights, should leave journalists at least skeptical of their claims.

This is just the start. The mainstream news media is going to do everything possible, it appears, to undermine the person the voters chose to change the culture of the DA’s Office and to shift the way San Francisco addresses criminal justice.

Oh, and Nathan Ballard, who has worked for Gavin Newsom and was close to Ed Lee, thinks this whole thing — a media attack on the city’s new progressive DA — is a joke. Just in case any reporters were still wondering about his credibility.