Hillary is going to be trashed for saying what she believes about Bernie.  I don’t think she cares.  Why should she?  Having won the 2016 election by 3 million votes.

Hillary Clinton has criticized Bernie Sanders, insisting “nobody likes” and “nobody wants to work with” him.

The Hollywood Reporter on Tuesday published the comments, which Clinton made in a four-part Hulu documentary, Hillary, to premiere at the Sundance film festival in March.

Clinton beat Sanders in a bitter 2016 primary, before losing the presidential election to Donald Trump.

“He was in Congress for years [and] had one senator support him,” Clinton said, going on to call Sanders “a career politician” and to dismiss his claim to represent the everyday American worker as “just baloney”. 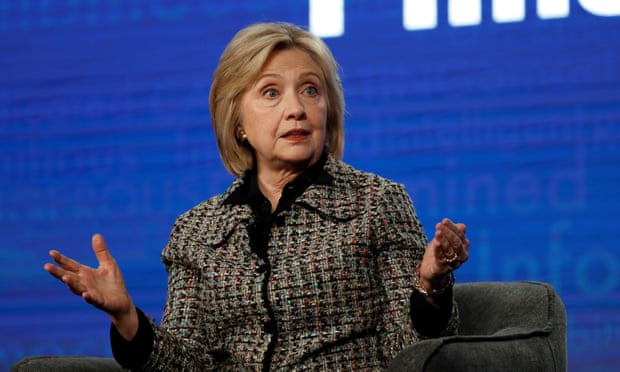 “I feel so bad that people got sucked into it,” Clinton said.

She also pointed to a “culture around” Sanders that she said perpetuated sexism, racism and misogyny within the senator’s campaign staff.

“It’s his leadership team,” she said. “It’s his prominent supporters. It’s his online Bernie bros and their relentless attacks on lots of his competitors, particularly the women.”

Asked by the Hollywood Reporter if she would endorse Sanders should he win the primary this year, Clinton refused to commit, saying: “I’m not going to go there yet.” But in a tweet on Tuesday evening, she appeared to clarify her position.

“I thought everyone wanted my authentic, unvarnished views!” she wrote. “But to be serious, the number one priority for our country and world is retiring Trump, and, as I always have, I will do whatever I can to support our nominee.”

On Tuesday, Sanders issued a statement in response to Clinton’s comments. He did not address them head-on.

Sanders has attracted attacks as he has risen in the polls. With the Iowa caucuses two weeks away, he is racking up high-profile endorsements and leading in some polls of likely Iowa voters.

Earlier in January, Elizabeth Warren, a competitor for the Democratic nomination, accused Sanders of telling her in a private meeting in 2018 a woman could not beat Trump at the polls.

Sanders has strongly denied making the comment. Both held their ground when asked to clarify their remarks on the debate stage, leading to a confrontation after the debate had ended. CNN published audio, in which Warren accused Sanders of calling her “a liar on national TV”.
https://www.theguardian.com/us-news/2020/jan/21/hillary-clinton-bernie-sanders-nobody-likes-him-hulu-documentary