The Screaming Trumpistas will fight to support their totally unhinged hero until the bitter end.

These bitter enders may be struck down during the Pandemic. No matter. They’re True Believers all.

These folks will tune into Fox News and its duplicative cousins to drink the Kool-Aide being spoon fed to them.

These gullible citizens will howl in disbelief while they are going down while blaming everyone but the Shyster who put them in danger of death.

He is telling us plainly that he will stoke civil unrest and further harm public health to find a political pathway out of a galactic-scale fuck-up of his own making.

Trump’s stirring up his base will have consequences. Many of the people at his “liberation” rallies may well get or spread COVID-19, just when the country’s continued diligence and caution about flattening the curve through social distancing is most vital. These engineered protests are taking resources that first responders desperately need to respond to the crisis, not Trump’s crisis actors.

Donald Trump fired the first shots in the COVID Civil War this week, a modern-day Jefferson Davis of the Pro-Plague States of America sending his opening salvo from Fort Twitter at Democratic governors who dared to question if it wasn’t just a wee bit early to end the stay-at-home orders in states still far to the left of the peak.

He started the week with claims of “total authority” and then cried about a supposed mutiny by mouthy state leaders. By Friday, he was up to calls to “liberate” states.

Whatever the enemy, the Trump horde is lurching toward it with protests “breaking out” in state capitals across the land filled with MAGAmericans clad in their Red Badge of Credulity hats and carrying the banners of Esoteric Trumpism. Events in Florida, Kentucky, Michigan, New York, North Carolina, Ohio, Virginia, and California have popped up in the last 36 hours, with more on the way. 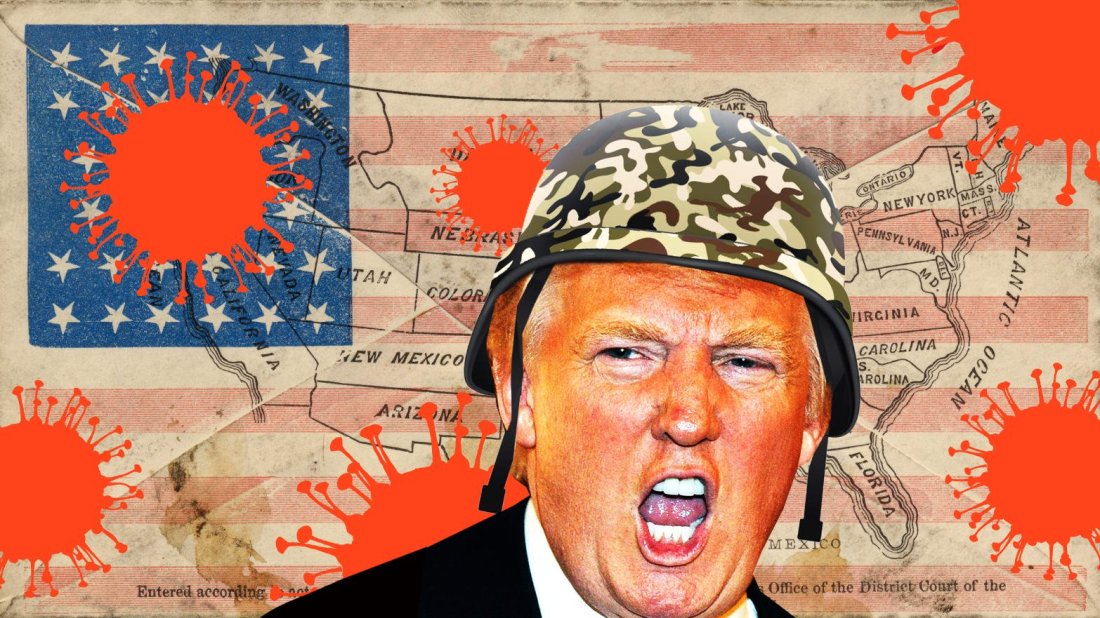 In Ohio, one striking photograph showed the screaming faces of Trump supporters pressed against the glass doors of the state capitol, their incandescent rage caught in a single moment of fury. Surrounding capitols, blaring horns, they’re ready to protest side by side, fighting social distancing to the death.

First of all, you should understand that none of this—zero, zip, nada —is organic. None of this is real. Every bit of it is being pushed on Trump’s behalf via the twin modalities of our doom: Fox and Facebook.

Just as the Tea Party had a brief, organic origin story but was soon managed, harnessed, controlled and weaponized, so too is today’s Trump movement. The crowds showing up for these “liberation rallies” are lowing cattle, led down a chute to be fed or slaughtered, depending on the day. Their ignorance of their own state as philosophical zombies whose lives Trump is literally willing to sacrifice for a tiny bump in the stock market is breathtaking. Dying for a second-order economic effect will show the libs, right?

“Trump’s not worried that these protests could get out of hand—he’s counting on it. ”

I’ve gotten in trouble before for calling them a bunch of credulous boomer rubes, but have a look at the demographic of any person at these stupid protests in pro-plague America; lily-white, assertively boomer, and as shrill as Tomi Lahren after an espresso colonic.

The first Civil War was against the vilest institution imaginable: a war to end a regime that treated humans as property, and waged at a horrific, bloody cost. Trump’s cosplayed civil war is against science, medicine, healthy public policy, and the desire to not have millions of Americans die in a preventable and shockingly resilient plague.

Let’s be clear about the things he’s going to do and the risks he is willing to take with the American people. Trump is telling us bluntly and plainly that he will stoke civil unrest to find a political pathway out of a galactic-scale fuck-up of his own making. He’s willing to let a disease that’s already killed 33,000 Americans due to his inaction and dishonesty spread further, faster, and more widely.

Driving these protests is one more proof that Trump is a president without a shred of commitment to the oath of office, the country he claims to serve, or any American citizen not named Ivanka. He wants what he wants, and damn the toll in lives and treasure. He’s not worried that these protests could get out of hand—he’s counting on it.

Trump knows his power over his base like the most exaggerated horror-movie mind control, and that no other president has ever enjoyed anything close. He knows his base—amplified by his pet media outlets—will take the ball and run with it no matter how crazy the idea. They’ll revel in the media criticism of their excesses and damn the consequences.

In Michigan, we saw protesters waving Confederate flags. In California, there were signs about how “COVID-19 is a lie.”

The one person who won’t pay a price? Donald Trump.

Immune to political pressure, unable to process moral responsibility, and unwilling to put anything above his raw, raging ego and his boundless desire to hold power, he’ll keep badgering his base to start the COVID Civil War, one tweet at a time.