Gun toting Americans need to be taught a lesson in tough justice.

Ironic that it’s officers of the Court, wife and husband attorneys, who face up to four years in prison. This is the couple which Trump paraded before the nation during the Republican convention last August.

It’s the best Trump can offer as an example of his soon to be exiled Make America Great Again campaign.

These attorneys are the type people who have risen from the toxic swamp of America’s underbelly during the past four years.

A police probable cause statement said protesters feared “being injured due to Patricia McCloskey’s finger being on the trigger, coupled with her excited demeanor.”

The incident happened June 28 as protesters were walking toward the home of Mayor Lyda Krewson, a few blocks away. They suddenly decided to veer onto the McCloskeys’ street, prompting the confrontation that was caught on cellphone video. It showed Mark McCloskey in front of the $1.15 million home armed with an AR-15 rifle and Patricia McCloskey with a semiautomatic handgun.

Al Watkins, an attorney for the couple, confirmed to The Associated Press the indictments against Mark McCloskey, 63, and his wife, Patricia McCloskey, 61. A spokeswoman for Circuit Attorney Kim Gardner declined comment.

The McCloskeys, who are both attorneys, have become folk heroes among some conservatives. They argue that they were simply exercising their Second Amendment right to bear arms, and were protected by Missouri’s castle doctrine law that allows the use of deadly force against intruders. The case has caught the attention of President Donald Trump, and Republican Missouri Gov. Mike Parson has said he will pardon the couple if they are convicted.

The McCloskeys also were featured speakers on the first night of the Republican National Convention. They’ve accused the “leftist” Democratic St. Louis leadership for their plight.

But Gardner, a Democrat, charged the couple with felony unlawful use of a weapon. She said the display of guns risked bloodshed at what she called an otherwise peaceful protest.

Watkins said that addition to the weapons charge, the grand jury indictment includes a tampering with evidence charge. It wasn’t clear what led to that additional count, he said.

The McCloskeys contend the protest was hardly peaceful. They say protesters came onto the private street after knocking over an iron gate and ignoring a “No Trespassing sign,” and said they felt threatened. 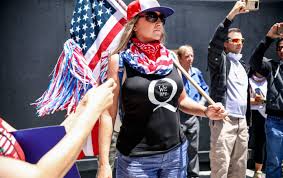 Mark McCloskey, after a brief court hearing last week, expressed anger that he and his wife faced criminal charges while those who trespassed onto his property did not.

“Every single human being that was in front of my house was a criminal trespasser,” McCloskey said on Oct. 6. “They broke down our gate. They trespassed on our property. Not a single one of those people is now charged with anything. We’re charged with felonies that could cost us four years of our lives and our law licenses.”

The June protest in St. Louis was among hundreds nationwide in the aftermath of George Floyd’s death in Minneapolis.