The only way these fascist and neo nazi groups will be put down is for the Feds to utilize all the tools at their disposal and crush them.

The law enforcement and judicial crackdown on the perpetrators of the Trump fueled January 6 aborted Coup D’Etat are justifiably facing the full wrath of the Federal government.

Federal prosecutors investigating the violent riot at the Capitol this month announced their first conspiracy charges against the Proud Boys on Friday night, accusing two members of the far-right nationalist group of working together to obstruct and interfere with law enforcement officers protecting Congress during the final certification of the presidential election.

In a brief news release, the Justice Department said that an indictment had been filed against two Proud Boys, Dominic Pezzola, of Rochester, N.Y., and William Pepe, of Beacon, N.Y. But by late Friday night, the charging papers had not yet appeared in the Washington federal court database. Both Mr. Pezzola, a former boxer and Marine, and Mr. Pepe, an employee of the Metropolitan Transportation Authority, already had been facing lesser charges connected to the Capitol attack.

The Proud Boys, a self-described “western chauvinist” group that has a long history of bloody street fights with the activists known as Antifa, have drawn the attention of investigators because they are one of the extremist outfits that had a large presence on Capitol Hill during the assault. 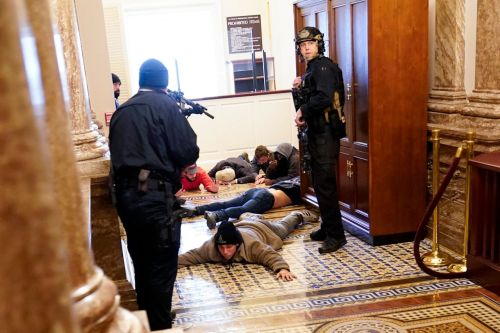 The organization, which has maintained links with both overt white supremacists and more mainstream Republicans, has been a vocal — and often violent — advocate for former President Donald J. Trump. During one of the presidential debates, Mr. Trump seemed to signal his support by telling its members to “stand back and stand by.”

Investigators have made a priority of exploring whether the attack was planned in advance. Earlier this week, Michael Sherwin, the U.S. attorney in Washington, said that prosecutors were focused on bringing “more complicated conspiracy cases related to possible coordination among militia groups” and “individuals from different states that had a plan to travel” to Washington before Jan. 6.

Because the new indictment remained under seal on Friday night, it remained unclear precisely how prosecutors believed that Mr. Pezzola and Mr. Pepe conspired together to obstruct law enforcement.

Mr. Pezzola, 43, has been a particular focus of the sprawling investigation into the Capitol attack almost from the moment it began.

Court papers released on Friday morning said that he was in the first wave of rioters to enter the building, shattering a window with a plastic police shield. After climbing through the window, prosecutors said, Mr. Pezzola joined a mob that confronted a Capitol Police officer, Eugene Goodman, in a stairwell near the Senate floor. According to court papers, someone in the mob called out, “Where they meeting at? Where they counting the votes?”

Prosecutors said that Mr. Pezzola later posted a video of himself online, smoking a cigar inside the Capitol. In the video, court papers say, he refers to the cigar as a “victory smoke,” adding that he knew the mob would be able to take over the building if the rioters “tried hard enough.”

When F.B.I. agents searched Mr. Pezzola’s home near Rochester after the riot, prosecutors said, they found a thumb drive with several PDF files, some suggesting he had been studying bomb-making techniques. The computer files, court papers said, had titles like “Advanced Improvised Explosives,” “Explosive Dusts” and “Ragnar’s Big Book of Homemade Weapons.”

Michael Scibetta, Mr. Pezzola’s lawyer, said on Friday night that he had not yet seen the new conspiracy charges and complained that the authorities were not letting him see his client, who is now in custody in Washington.

“The matter is evolving,” Mr. Scibetta said, adding that prosecutors were depriving Mr. Pezzola of “his constitutionally guaranteed right of assistance of counsel.”

Mr. Pepe’s lawyer, Susanne Brody, did not respond to an email seeking comment.At least four other members of the Proud Boys have been charged so far in connection with the Capitol attack, including a top-ranking leader of the group, Joseph Biggs. Mr. Biggs, a U.S. Army veteran, stands accused of leading a group of about 100 Proud Boys on an angry march toward and into the Capitol.