There are no innocent bystanders in Thug War Criminal Putin’s brutal assault on the independent nation Ukraine.  In Vladimir Putin’s warped mind journalists are a lethal target whether at home or on the battlefield in Ukraine.

Brent Renaud paid the ultimate price for his truth seeking. May he Rest in Peace.

A US journalist working in Ukraine has been shot dead in the town of Irpin, outside Kyiv, police say. Brent Renaud, 50, was a journalist and filmmaker who was working in the region for Time.

Kyiv’s police chief Andriy Nebytov said he had been targeted by Russian soldiers. Two other journalists were injured and taken to hospital. It is the first reported death of a foreign journalist covering the war in Ukraine. One of the injured journalists, Juan Arredondo, told an Italian reporter he had been with Renaud when they came under fire.

“We were across one of the first bridges in Irpin, going to film other refugees leaving, and we got into a car”, he said in a video published on Twitter.

Photographs are circulating online showing a press ID for Renaud issued by the New York Times. In a statement, the newspaper said it was “deeply saddened” to hear of Renaud’s death but that he had not been working for the newspaper in Ukraine. Renaud last worked for the publication in 2015, the Times said, and the press ID he was wearing in Ukraine had been issued years ago. 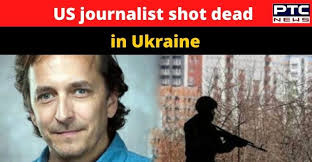 Renaud had reported from Afghanistan, Iraq and Haiti. He won a Peabody Award for his work on a 2014 series on Chicago schools, Last Chance High. He often worked alongside his brother, Craig, also a filmmaker. It is not known whether Craig also travelled to Ukraine.

Renaud’s death comes less than two weeks after Ukrainian journalist Yevhenii Skaum, a camera operator for the Ukrainian television channel LIVE, was killed when a TV transmission tower in Kviv was hit by shelling.

A few days later, a British journalist covering the war in Ukraine was shot and wounded after coming under fire in Kyiv.

From TIME Editor in Chief and CEO Edward Felsenthal and President and COO of TIME and TIME Studios Ian Orefice:

We are devastated by the loss of Brent Renaud. As an award-winning filmmaker and journalist, Brent tackled the toughest stories around the world often alongside his brother Craig Renaud. In recent weeks, Brent was in the region working on a TIME Studios project focused on the global refugee crisis. Our hearts are with all of Brent’s loved ones. It is essential that journalists are able to safely cover this ongoing invasion and humanitarian crisis in Ukraine.