This story throws into sharp focus the growing dichotomy between the Haves and Have Nots in The City of Saint Francis of Assisi.

Residents from one of San Francisco’s most desirable neighborhoods are taking a controversial approach to blocking a new homeless shelter: launching a crowdfunding appeal.

Their campaign on GoFundMe – best known as a site that hosts fundraisers for medical expenses or victims of natural disasters – has prompted an angry response from the city’s mayor.

It has drawn more than $46,000 dollars, nearly half of its stated $100,000 goal. The money is to go to  local attorney Andrew Zacks working on behalf of the residents, and its 91 donors include an anonymous contributor who gave $10,000, along with hedge fund managers, executives and authors. 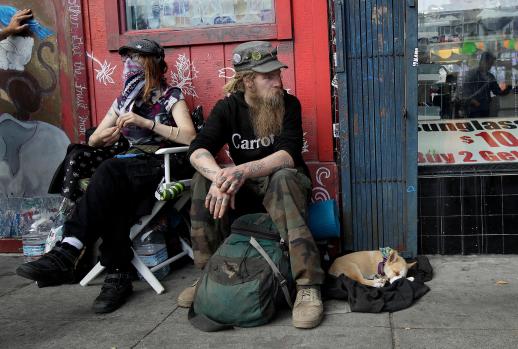 A rival GoFundMe in support of the proposed shelter was launched on Thursday, and quickly received a $5,000 donation from GoFundMe itself.

A thriving tech economy has squeezed the San Francisco housing market, and like many cities on the west coast it is grappling with an overwhelming homelessness crisis. The number of homeless people has remained constant despite massive investments, and the new shelter in the Embarcadero was to be part of the city’s promise to increase the number of shelter beds by 1,000. There are roughly 7,500 homeless residents in the city and more than 1,400 are waiting for temporary spots to open.

“People want us to address the challenges on our streets and help our unsheltered residents into housing, and I am committed to doing the hard work to make that happen,” the San Francisco mayor, London Breed, said in a statement given to the San Francisco Chronicle.

“But it’s incredibly frustrating and disappointing that as soon as we put forward a solution to build a new shelter, people begin to threaten legal action,” the Mayor added.

The money raised will be paid to  real estate attorney Zacks, who advocates on behalf of the rights of property owners and last made the news in 2017, when he defended a San Francisco property owner who tripled the rent on his tenants, from $1,900 to $6,700.

The 2.3 acre vacant lot just beneath the Bay Bridge, on San Francisco’s eastern shore, seemed the perfect spot for a new temporary shelter, which would add 200 beds.

But, situated close to tourist attractions, seaside bike lanes, and – most notably – neighborhoods filled with million-dollar-homes and condos, the site was primed for local pushback.

Wallace Lee, the father of a two-year-old who lives two blocks from the proposed site, says he is helping to organize against the project out of concerns for his family’s safety. “It is increasingly a place where people are starting families,” he says. “There are a lot of strollers in the neighborhood that weren’t here when I moved in 2013.”