Deutsche Welle writes disparagingly about the sleepy World Cup semifinal between Holland and Sweden.   Team USA will come with its usual theatrics and hi-octane attack on Sunday to liven up the proceedings before a worldwide audience.

The weak Swedish performance was surprising given the manner in which the team dismantled the Germans earlier and played a very tough match against Team USA.

Jackie Groenen’s (Shown above and below) fine extra time strike settled a forgettable World Cup semifinal against Sweden and set up a World Cup final against the United States on Sunday in Lyon.

The Dutch team has been one of the best-supported sides in France. While Americans traveled in the largest numbers, Dutch fans have made themselves more obvious, pouring into city streets and turning entire stadium sections orange. On Wednesday night, they even had two bugle players providing a 90-minute soundtrack in the stands.

Back home, their games have set viewership records. Their quarterfinal against Italy, for instance, drew an audience share of 80.3% in the Netherlands, according to FIFA. Sunday’s game will likely be another record-breaker for the Dutch, but the team itself is under no illusions. Against the three-time world champion Americans, it will be a clear underdog.

“Now we have to party,” defender Stefanie van der Gragt said, draped in a Dutch flag. “And tomorrow we’ll talk about the USA.”

The thought of Dutch orange blobs in the stands — not to mention the novelty of relative newcomer playing for the title — was irresistible. Also appealing: the Dutch horn section belting out kitschy numbers and the unbridled joy of the fans. 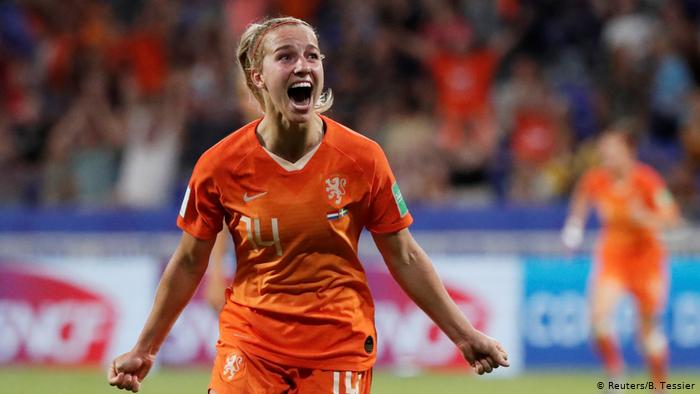