The San Francisco Board of Supervisors has taken a courageous and practical unanimous vote.

The NRA is a “Domestic Terrorist Organization.”  For too long this group of gun toting demagogues has bullied, intimadated and coerced elected officials at all levels from town councils to Congress and the Executive Branch  stop meaningful gun control in America. Their conduct is disgraceful and abhorrent.

The murder rate and mass shootings historically afflicting this country has been aided and abetted by the powerful, mindless and doctrinaire reactionaries of the NRA.

The NRA has and will continue advocate for the right to keep and bear arms regardless of the consequences to the public.

San Francisco’s Board of Supervisors on Tuesday unanimously passed a resolution to declare the National Rifle Association a domestic terrorist organization, while also urging other cities, states and the federal government to ascribe the same label to the gun lobbyist group. 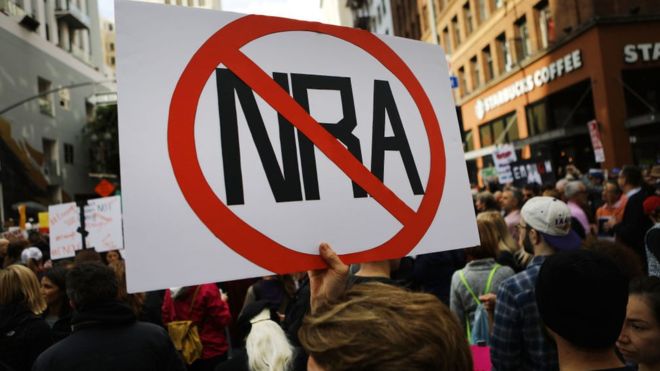 Supervisor Catherine Stefani, a Deputy District Attorney, introduced the resolution after the Gilroy Garlic Festival shooting, and she said that incident as well as mass shootings in El Paso and Odessa, Texas, as well as Dayton, Ohio, have bolstered the argument for passing the resolution.

“It is time to rid this country of the NRA and call them out for who they really are: They are a domestic terrorist organization,” Stefani said.

Stefani  (pictured below) blamed the NRA for the proliferation of guns in the United States and the mass shootings that have become a near daily occurrence.

Stefani’s statement notes that the U.S. Department of Justice defines terrorist activity as the use of any “firearm, or other weapon or dangerous device, with intent to endanger, directly or indirectly, the safety of one or more individuals” and any member of an organization that “commits an act that the actor knows, or reasonably should know, affords material support, including communications, funds, weapons, or training to any individual has committed or plans to commit a terrorist act.”

The resolution was introduced after an attack on July 28, 2019 that made Gilroy, California the 243rd community in the United States to experience a mass shooting.

Since then, Stefani said, we have seen “more carnage across this country” with massing shootings in El Paso, Texas, Dayton, Ohio, and Odessa, Texas.

“The NRA exists to spread disinformation and knowingly puts weapons in the hands of those who would harm and terrorize us by blocking common-sense gun violence prevention legislation, and by advocating for dangerous legislation like stand-your-ground laws, permit-less carry, and guns in schools from kindergarten on up through university,” Stefani said.

She also called the NRA a misogynist organization because of its stance on arming domestic abusers.

The NRA responded with a statement calling the resolution a “ludicrous stunt,” according to multiple news outlets.

“This ludicrous stunt by the Board of Supervisors is an effort to distract from the real problems facing San Francisco, such as rampant homelessness, drug abuse and skyrocketing petty crime, to name a few,” the statement said. “The NRA will continue working to protect the constitutional rights of all freedom-loving Americans.”