Supervisor Connie Chan’s proposal to open JFK Promenade to cars crashed on April 26, 2022 when seven of her fellow legislators said NO. The newly minted JFK Promenade is a signal victory for “Progressives” who fought a pitched battle against Supervisor Chan and the Fine Arts Museums of San Francisco.

There will be a settling of scores at the ballot box in the newly drawn boundaries of District 1 in San Francisco. Some Political observers are already saying Connie Chan is at risk. Why?  The inclusion of the Sea Cliff enclave into the District. Wealthy moderate voters.  The area in Red on the Map above shows the additions to the District 1. The toney Sea Cliff, north of Lake Street and Presidio Terrace.

I would argue Connie’s political problem lies elsewhere. It is her flat out betrayal of the “Progressive” base which lifted her to victory.

The San Francisco District 1 Supervisor eked out a 123 vote victory in the 2020 election. (Connie Chan 17,030 – Marjan Philhour 16,907). A victory in large part the result of her environmental commitments.  Candidate Chan earned the nod from the influential national political group Sunrise.  Featured in a recent issue of The New Yorker.

Once in office in 2021 now Supervisor Chan proceeded to turn her political back on the crucial “Progressive” segment of her voters.  Beginning in March 2021, in well documented actions, Supervisor Chan was worked on by the influential Fine Arts Museums of San Francisco.  Work which continued through 13 months and up to the final vote which made JFK Promenade a reality. 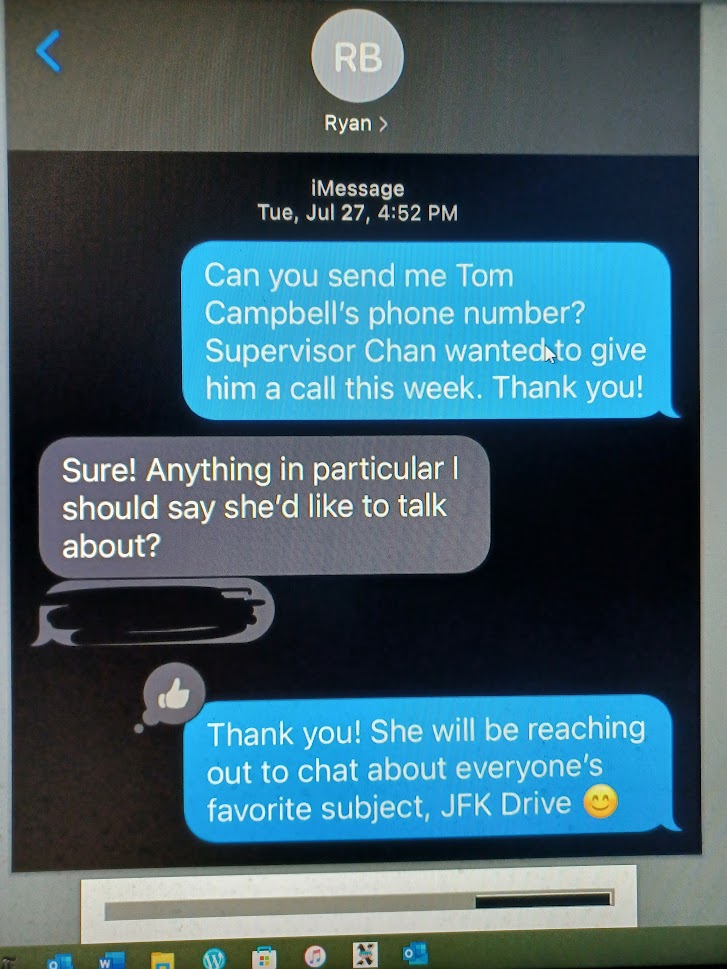 “Progressives”, particularly those who waged this political battle,will be waiting to teach the Supervisor a tough lesson at the ballot box.  You do not betray the people responsible for your success. The people who waged this battle have long memories and will not soon forget her betrayal.